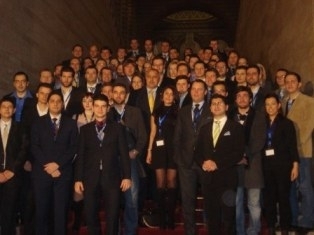 In February, YEPP held a seminar hosted by MGERB on Youth Policies in the European Dimension. MGERB kicked off the event with a first meeting in Sofia’s Council of Ministers with the Prime Minister – Mr. Boiko Borissov. He spoke at length about the need for cooperation and exchanges between different parts of Europe and the youth as a crucial vehicle for these exchanges. His words were born out in the meeting YEPP participants held then in the National Assembly on
• “The role of Young People in the Legislative Process” with Ms. Tsetska Tsacheva – Chairwoman of the National Assembly of Republic of Bulgaria,
• “Security Policies and Tackling Corruption in New Member States” with Mr. Tsvetan Tsvetanov – Vice-prime minister and Minister of Interior,
• “Surviving the Economic Crisis – the Challenges in Front of Youth Entrepreneurship” with Mr. Simeon Djankov – Vice-prime minister and Minister of Finance,
• “Europe of the Regions – strengthening regional cooperation” with Mr. Rosen Plevneliev – Minister of Regional Developmentand Public Works,
• “The common European foreign policy after the ratification of the Lisbon treaty” with Mr. Nikolay Mladenov – Minister of Foreign Policy,
• “Youth policies – challenges and perspectives. Developing strategy for youth. Establishing National Youth Councils” with Ms. Petia Evtimova – Deputy minister of Education, Youth and Science, responsible for Youth Policies.
After this comprehensive overview and discussions YEPP participants went to the office of the Mayor of Sofia to discuss the challenges in youth policies from the municipal point of view. Ms. Yordanka Fandukova – Mayor of Sofia gave of her time and wisdom before going to attend an important celebration and ceremony at the main church.
It was an extraordinarily well organized and welcoming seminar. Participants debated and learned from each other and from seminar speakers at very high levels. MGERB were perfect hosts and YEPP thanks them deeply for their efforts.