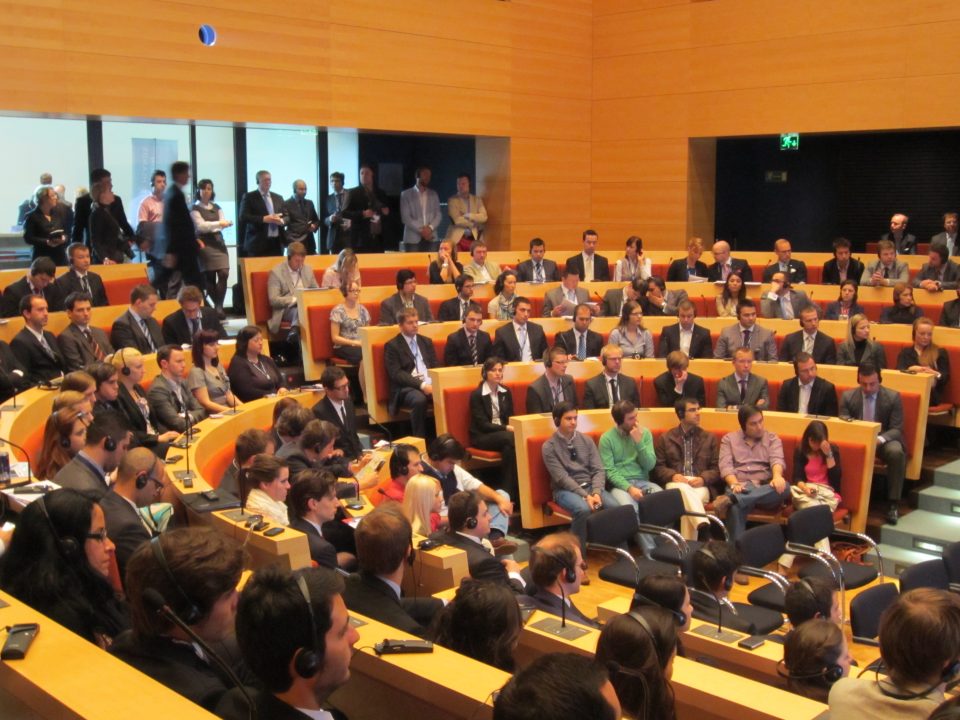 The Youth of the European People’s Party (YEPP) will hold its VIII Congress in May of this year. The Congress which will be entitled “How to finance the EU in the 21st century?” and will take place in Berlin, Germany from the 12-15 of May 2011. The Congress working sessions will focus on different aspects of the economic future of the EU. We will welcome approximately 250 participants from 56 Centre-Right youth political organisations from 38 countries across Europe as well as guests. We will be hosted by YEPP member organization JU from Germany.
The YEPP Congress is both a statutory event where elections of the next Board will take place alongside the adoption of a political programme and YEPP statutory amendments, as well as, an educational conference. The Congress educational sessions will provide a training ground for young active politicians on the topic of Europe’s economic future. In the debate sessions the participants will engage in discussion with their peers and invited experts. They will look at the financial situation in the EU with leaders from industry, with politicians from the local, regional, national, and European levels, and with academics and representatives from NGOs. Before and after the lectures and debates YEPP will hold its customary working groups to amend working papers and resolutions. These educational sessions will go hand in glove with the statutory training sessions which will both give the participants practice in a number of skills and practices essential to their political activities.
With an eye towards the economic and political climate of the last two years YEPP wishes to tackle the real challenges at the heart of the EU. Debating possible roads to solutions and making sure to examine the economic situation from multiple viewpoints is essential for the next generation which will be living in the world being fashioned today. As staunch EU advocates, YEPP proposes to contribute to this central debate.
The first day will be occupied with working groups on resolution, white papers, and the political programme. During the second day there will be multiple conference sessions with speakers. After each panel there will discussions and time for questions and comments. The last day will contain the statutory Congress.
Speakers will address the participants in the following order:
• Matthias Wissmann, President of the German Association of the Automotive Industry (VDA) and former Federal Minister of Transport, Building and Urban Development, former Chairman of the Junge Union Deutschlands
• Philipp Mißfelder MP, chairman of Junge Union Deutschlands and spokesman of the CDU/CSU- parliamentary group for foreign affairs
• Bernd Neumann MP, the Minister of State to the Chancellor and Commissioner of the Federal Government for Culture and the Media
• Laurent Schouteten, President of the YEPP
• Thomas Schneider, First Vice-President of the YEPP
• Dr. Hans-Gert Pöttering MEP, Chairman of the Konrad-Adenauer-Foundation, former President of the European Parliament
• Mr. Wilfried Martens, President of the European People’s Party and former Prime Minister of Belgium
• Günther H. Oettinger, European Commissioner for Energy and former Prime Minister of the state of Baden-Württemberg
• Dr. Norbert Lammert, President of the German Bundestag
• Chancellor Dr. Angela Merkel MP, Chairman of the CDU Deutschlands
• Dr. Michael Kemmer, Secretary General of the Federal Association of German Banks
• Dr. Wolfgang Schäuble, the Federal Minister of Finance
• Christian Kremer, Deputy Secretary General of the European People’s Party