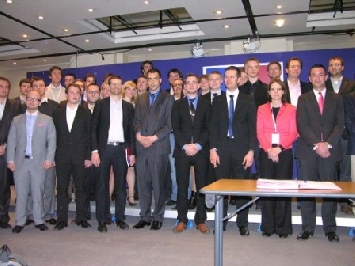 At YEPP’s Chairmen’s Conference held between the 8th-11th of April 2010 participants and chairmen replenished their efforts to work for better cooperation throughout Europe. The Conference officially tackled New Technologies in Politics and the Future of Political Europe. However, in working sessions delegates worked on numerous topics including the resolutions on:
High Speed Broadband Internet in Europe, The Banning of Ephedrine Mephedrone and the Regulation of “Head Shops”, Tightening Sanctions against Iran Concerning the Regime’s Nuclear Weapons Programme, a Union for the Mediterranean, and a Stronger EU with Stronger Partners.
A very high level of speakers contributed to YEPP’s debates. The Conference opened with an address of Xavier BERTRAND, UMP National Secretary, who urged the youth to seize all topics with passion. Speakers over the course of the event included Dominique PAILLE, UMP Spokesman, who hoped that the Greek and Georgian crisis would show that Europe has never been so closed to establishing itself as a leader on the international scale; and Guillaume KLOSSA, President of the NGO Europanova, who predicted that the aging of the population will be at the center of the democratic debate.
YEPP President Laurent SCHOUTETEN participated in a lively debate with Aloïs RIGAUT, of European Liberal Democrat Youth, and Pauline GESSANT, of European Federalist Youth. Their main point of agreement was to underline that Europe should answer European preoccupations and be closer to her citizens. Mr. RIGAUT underlined that, according to him, big coalition are counterproductive in the public debate. Pauline GESSANT added that implementing Europeans symbols would reinforce the spirit of cohesion.
On the topic of internet and technologies of information and communication YEPP welcomed Nathalie KOSCIUSKO-MORIZET, Junior Prospective and Digital Economy Minister, Benoist APPARU, Junior Housing Minister, former youth conservative party, President and Karim LESINA, Executive Director EMEA Government Affairs of AT&T. They gave different perspectives which roused the participants and prepared them for a lively debate on the following day with Ravi Singh, CEO and Founder of Election Mall. He passionately presented the importance and potential of technology in election campaigning. This discussion was culminated with the interventions of EPP Secretary General Marta LÓPEZ-ISTÚRIZ and Kostas SASMATZOGLOU, EPP spokesman who appealed to the youth to lead in this wave of technology. They presented the new EPP website with all its new technology tools.
Lastly, YEPP was honoured by the intervention of Hervé MORIN, Minister of Defence, President of Nouveau Centre. He spoke solemnly of the disparity between European interest and national interest. The Europeans have abandoned the idea of having an influence on important foreign policy matter, as representing Europe. Only France and Great Britain have a real defence policy; not only relying on the NATO alliance. Hervé MORIN considered that it was of utmost importance in the long run for Europe to rectify this situation. With these sobering thoughts, YEPP participants debated and signed their Joint Chairmens’ Resolution on Mobility of Youth in a state of renewed thoughtfulness.