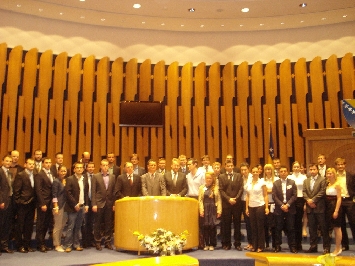 YEPP held its first ever seminar in Sarajevo this September. It was entitled The Future of EU Enlargement in the Western Balkans and was a success. Enlargement and Integration are crucial issues for the EU with an important focus on the Western Balkans. Former European Commissioner for Enlargement, Olli Rehn frequently underlined that Enlargement is a strategic priority to the EU. It might also be a strategic stabilizer in the region. It perhaps impacts both EU and non-EU countries in key policy areas more than any other issue. Therefore, this topic is of special interest to candidates and potential candidates as well as their neighboring countries, to EU member states facing expansion of the Union, and to the youth who will lead the Union through future challenges.
The Seminar welcomed 60 participants from around Europe as well as guests invited by the hosts from other political youth party organizations of Bosnia and Herzegovina: PDP, HDZ, and HDZ 1990. They tackled core difficult issues in enlargement and integration which concern Europe on minute and grand scales. By holding this Seminar in a potential accession nation, and a particularly complicated case study at that, the Seminar could present a most holistic and nuanced study of EU enlargement in the Western Balkans.
Four debate and lecture panels took place (for details please see attached Programme) enriched by historical, religious, and cultural introductions. The seminar drew prominent speakers from Bosnia and Herzegovina, the international community, political and civil service community, the religious community, and the academic and economic communities to give insight into many aspects of the subject. Topics for the discussion sessions included:
• International Perspective on EU Enlargement in the Western
Balkans
• The Challenges ahead for EU Enlargement – What are the
prospects for the Western Balkans?
• Religious communities and Enlargement & Integration
• Economic Development and Enlargement
After each panel there were discussions and time for questions and comments. In accordance with the usual YEPP practice, the Working Groups and Council meeting provided an opportunity to discuss and produce concrete findings based on the Seminar proceedings. YEPP was very pleased with the Sarajevo Seminar this September and thanks the Youth of SDA for its organization and efforts in the midst of such a busy campaigning time.