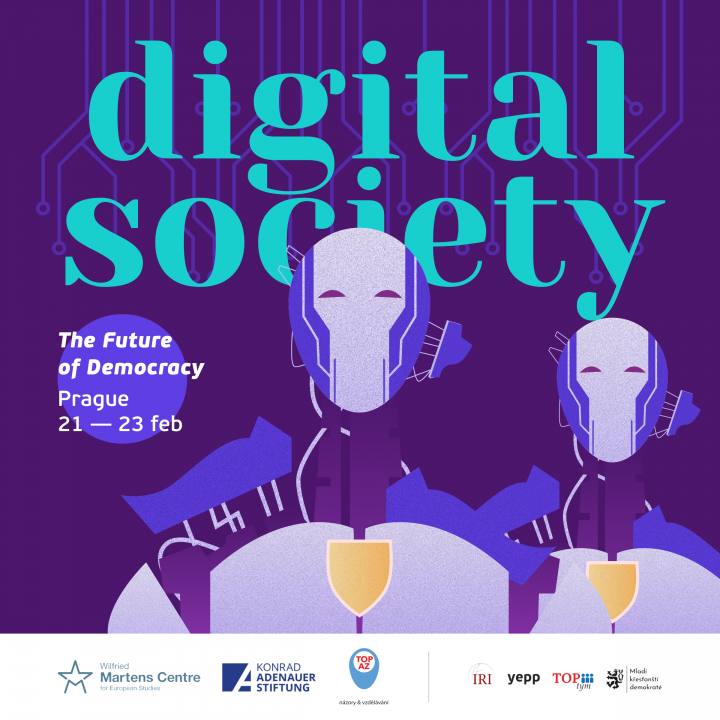 Prague, Czech Republic – Members of the Youth of European People’s Party’s (YEPP) and youth from Czechia will gather this weekend in Prague to discuss digitalization and the opportunities and challenges it brings in relation to democracy. The Conference titled “Digital Society: The Future of Democracy” will welcome a number of distinguished speakers from NGO’s and private sector to discuss and debate on the issue of big tech companies and privacy issues, cybersecurity and digitalization of society as a whole.
The event will be organised by the Wilfried Martens Centre for European Studies, Konrad Adenauer Stiftung and TOPAZ and hosted by Top Team in cooperation with MKD. The Conference will see over 100 delegates from 34 European countries in attendance.
Czechia, the country of Tomas Garrigue Masaryk and Vaclav Havel, is the perfect place to speak about democracy but also its limitations. The recent advances in technology have empowered society in an unprecedented way, not the less, it has also facilitated greater opportunities for malicious actors to spread fake news and propaganda to fuel their agenda.
In a separate event which will be held on Saturday, 23 February, YEPP delegates will discuss and adopt its Youth Manifesto for the upcoming European elections in May 2019. On this occasion, the delegates will be joined by Ludek Niedermayer, MEP (TOP 09) and Dara Murphy, Campaign Director (EPP) to outline their ideas for the future of Europe and discuss the plans for the elections campaign.
Speaking ahead of the opening of the Conference, Jan Kavalirek, the President of Top Team, said: ‘’We are delighted to have our friends from the centre-right family gather in Prague right before the elections to address the challenges and opportunities digitalization brings to our continent. In the past years, we have seen the handiwork of foreign powers in many elections that were held in Europe and beyond. Democracy is one of our most important values and we cannot let anything jeopardize it.’’
YEPP President, Lidia Pereira, continued: ‘’YEPP is very grateful to our Czech friends and other organisers for facilitating this meeting. The rise of digital society has been beneficial not only to Europe but as a worldwide phenomenon. It does, however, contain some risks which need to be taken seriously. It is the politician’s responsibility to manage these risks and in this regard, we must tread carefully.’’