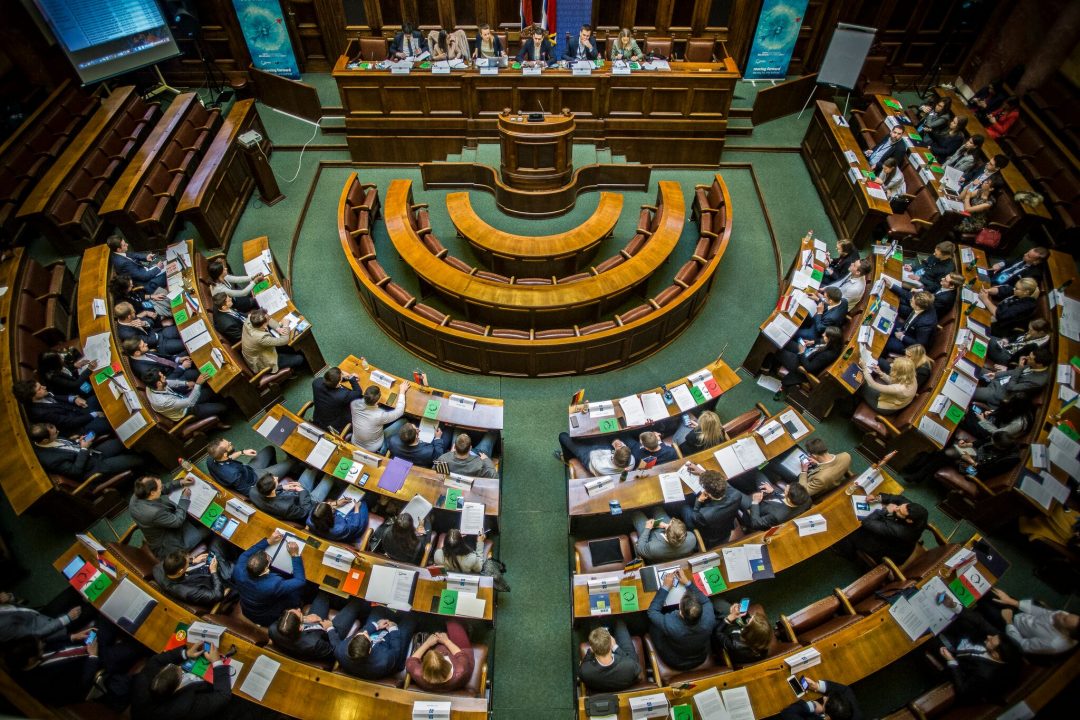 The Youth of the European People’s Party (YEPP) was delighted to hold a Conference in Serbia this past weekend. The event saw 90 delegates from over 30 European countries descend on Belgrade to discuss and debate many topical political issues.
Serbia, which gained EU candidate status in 2012, is hoping to join the European Union by 2025 and has made real progress towards achieving this goal in recent times. In order to provide a better understanding of the challenges and achievements of Serbia since 2013, the council was addressed by President of Serbia, Aleksandar Vucic and Ms. Jadranka Joksimovic, Serbian Minister for European Integration.
Mr. Vucic afforded delegates the opportunity to pose a wide range of questions on issues ranging from Serbian relations in the West Balkans to EU Serbian commitments.
The Council subsequently discussed the Role of the Parliament in the Process of European Integration of Serbia with Vladimir Orlic MP and Elvira Kovac MP.
The Council passed resolutions on a variety of topical policy issues including the European Fund Industry, the Minority Safe Pack Initiative and further transparency in the parliamentary allowances of European politicians. Resolutions relating to Brexit were also submitted by Junge OVP, Austria and Young Fine Gael, Ireland. In light of the ongoing Brexit negotiations, which will hopefully graduate to the second phase on 14th December, YEPP called on the European Institutions to see Brexit as an opportunity to start a comprehensive reform process. YEPP also voted to follow the lead of Senior Political Figures such as Jean Claude Juncker and Michel Barnier in seeking a frictionless border between the Republic of Ireland and Northern Ireland which would see no divergence in rules relating to the internal market or customs union between the two countries.
The primary focus of this Council Meeting was to further develop YEPP’s ideas for the Future of Europe. In a time where Europe as we know it is changing, it is vital that YEPP provides a voice for young Europeans and puts forward a vision that is inclusive and reflective of their views. A White Paper was put forward to start the discussion on the Future of Europe which provoked extensive deliberations and contributions amongst delegates.
President of YEPP Andrianos Giannou said “As the largest youth political organization in Europe, it is our duty to provide inclusive policy discussion and submissions which engage with the needs and aspirations of all young Europeans. I was very happy to see the level of debate and engagement and I am looking forward to progressing and consolidating a paper at our next Council meeting.”
YEPP was extremely fortunate to have the Youth of the Serbian Progressive Party as partners for this event and thanks them for their support.