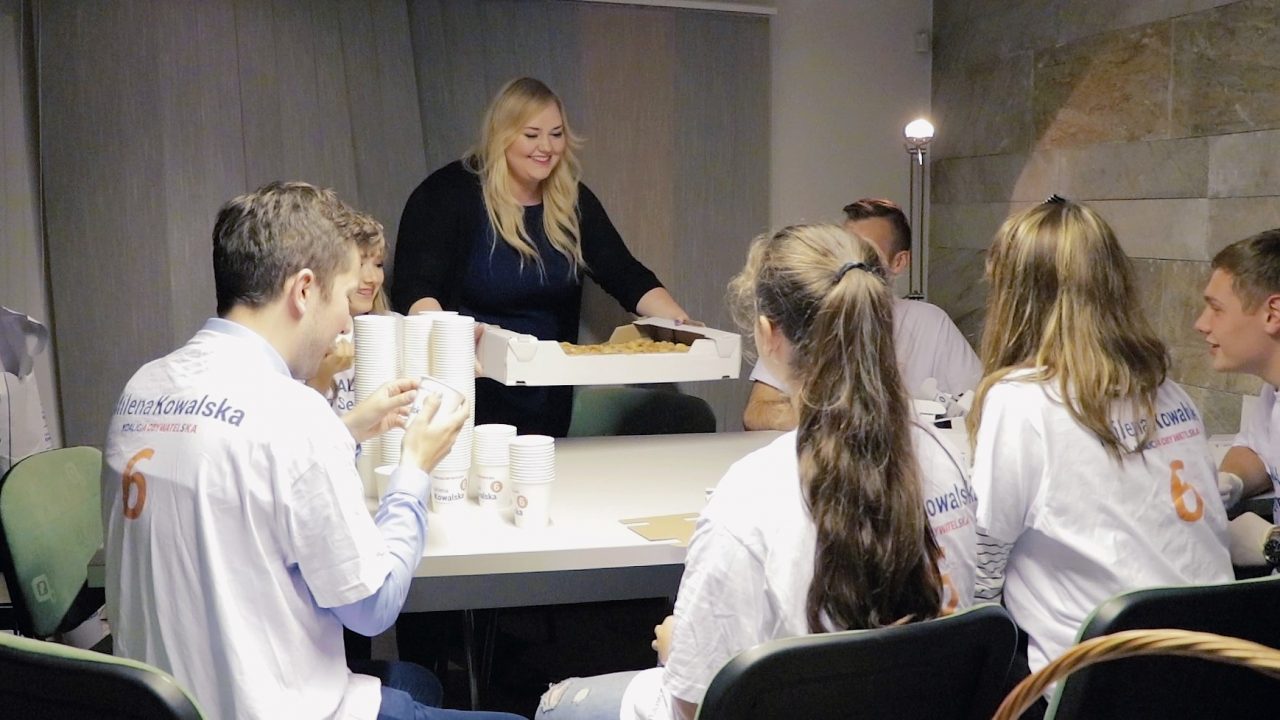 Milena and her team

Ostrów Wielkopolski & Sieradz, Poland – Youth of the European’s Party (YEPP) visited Poland last week to follow two young candidates running in the national election. Milena Kowalska (28), is the current President of Stowarzyszenie Młoda Demokratka youth wing of Platforma Obywatelska and is a city councillor representing her local district in Ostrow Wielkopolski. Outside of her political duties, she is currently working on her PhD and lectures at the Wroclaw University of Economics and Business.

Michal Pabich is running in Sieradz. He is the current Vice-President of Stowarzyszenie Młoda Demokratka and works in the local government. He graduated from the Faculty of Law and Administration at the University of Lodz.

YEPP visited Milena in Ostrow Wielkopolski. First on the agenda was a local district meeting where she is the city councillor representing the area. After this, we followed Milena and her team to her house where they were putting together little boxes of homemade cookies to give out to the locals at the market stall the following day. In the morning, YEPP along with Milena and her team headed to a local farmers market in a nearby town. Milena’s team set-up a table along with her campaign roll ups to handout fliers, armbands, pens and of course the free boxes of cookies with cups of coffee. It is fair to say that it is an incredibly effective means of canvassing locals. There was a constant flow of people approaching the stall enquiring about local issues and chatting with the candidate herself about what her plans were if elected.

Kowalska’s top priorities for this election are fighting for gender equality, people with disabilities and increasing support for the most vulnerable in society. Milena emphasised that one of the main issues facing her generation is climate change. She stated that: “Our generation is concerned with climate change. In Poland, the energy is based on coal what makes it much harder to fight the climate change. We must support the use of renewable energy sources, introduce policies to fight smog and encourage the reduction of plastic usage.”

In the afternoon, YEPP travelled to Sieradz, one hour from Ostrów Wielkopolski to meet with another young candidate running in the general election, Michal Pabich. YEPP joined him at the local radio station where he was being interviewed about his plans for the campaign. After this, Michal had a meeting with the current Mayor of Zdunska Wola, Konrad Pokora to discuss the issues that are impacting the local area.

Michal’s main concerns that he is advocating for are education and support for young entrepreneurs. Pabich stated that: “Overcrowded schools, tired students who often work two jobs. In these conditions, it is difficult to get a decent education, and this will determine our future and what future Poland will look like.” In Poland, young professionals are exempted from paying tax until they reach the age of 26. However, this doesn’t apply to entrepreneurs. Michal explained that: “Young entrepreneurs are faced with high taxes and little support for setting up their businesses. If this continues, young talents will still be emigrating outside our country. We need to support them in their creative and entrepreneurial pursuits.”