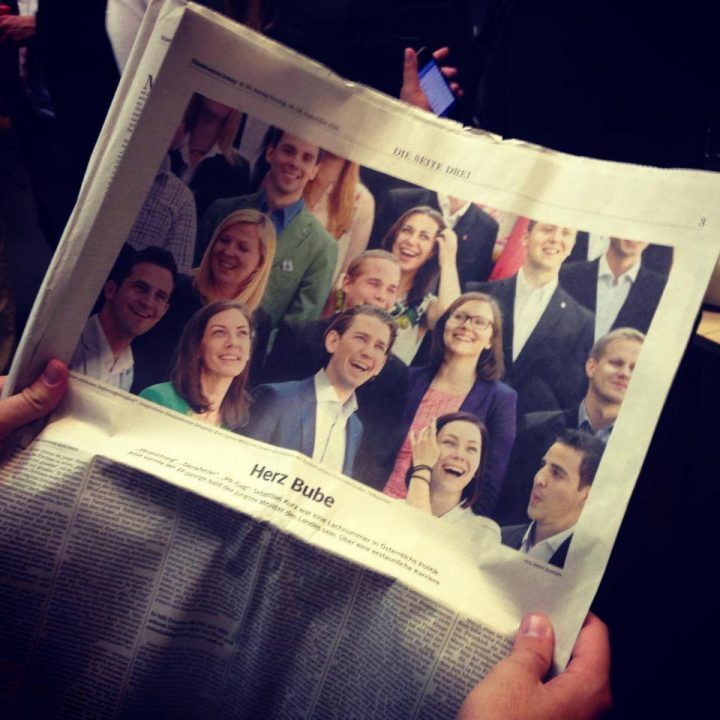 It’s all over the news. Pan-European press is surprised with the appointment of Sebastian Kurz as Austria’s Foreign Minister. The members of YEPP though, are not. Here is why:
Only a few weeks ago, when Sebastian Kurz attended the YEPP Council of Presidents in Bucharest, his colleagues, leaders of the national organisations of YEPP, congratulated him in person on his (outstanding election result) massive election at the parliamentary elections in Austria. Sebastian became the most voted man in the country, with more votes than his party leader and even the Chancellor himself. “How did he make it?” people were asking.
The whole YEPP family witnessed an unprecedented campaign, planned and implemented from the team of Junge ÖVP, spreading the message all over Austria. The amount of talent and competence in this team and the people around Sebastian is really remarkable.
With a campaign manager like Philipp Maderthaner, whose inspiration brought a preferential-vote record, and with a secretary general like Axel Melchior, whose dedication made hundreds of volunteers across the country campaign like it’s their purpose of life, you know you cannot lose.
But more than that, people like Gernot Blümel, former board member in Junge ÖVP and YEPP, who was recently appointed Secretary General of the party, and Stefan Schnöll, vice president of YEPP and responsible for Sebastian’s international presence, formed a dream-team that turned Sebastian’s campaign into history.
Sebastian never acted alone. From the moment he ran for president of the youth organisation, to his appointement as Secretary of State at the age of 24, to the moment he won most votes in the country, to date that he is sworn in as Foreign Minister, he always and everywhere puts his team in the front line. And this is the his recipe of success.
His election and his appointment did not come as a result of communication or simply because of his freshness as a young face. It came because of the work he has done as Secretary of State on immigration and integration, his leadership in Junge ÖVP, his tangible and active support to the party leader, his dedication to Europe and the family of YEPP.
The fact that he is different is obvious in the way citizens approach him. The fact that he is down to earth is proven from the way he speaks to media, even if he knows that he is a pan-european phenomenon.
Sebastian Kurz, in a statement to YEPP after his appointment as Foreign Minister, said: ‘I am very proud to ba part of this European family. I will do my best to deliver to the great challenges ahead’
Here in YEPP, we can only say that we are counting on him to prove that this generation of young Europeans is the one that will change the way politics are done and will re-build the relation of trust between citizens and politics. Sebastian’s example will work as a compass to that direction.
Team YEPP