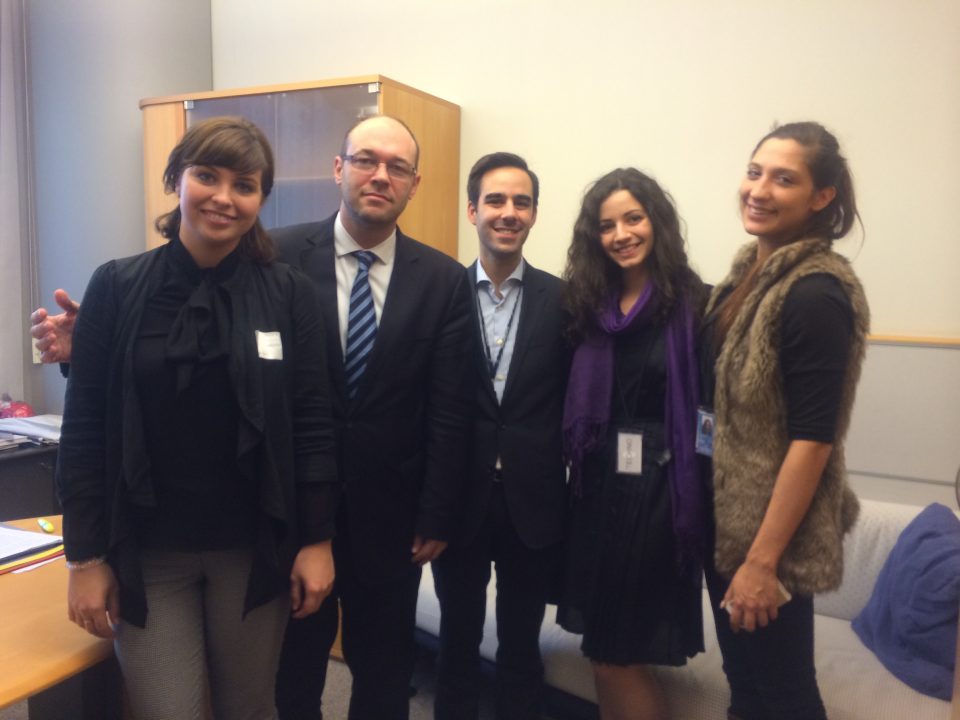 Representatives of the YEPP Brussels Group met with MEP Davor Stier, EPP Coordinator in the Development Committee to present him the resolution “THE EBOLA OUTBREAK SHOULD BE EFFECTIVELY CONTROLLED”, adopted by the YEPP Council of Presidents in Athens on the 6th of December 2014.

The resolution, an initiative of ONNED (Greece) in support with SDM (Slovenia), FR-PD (Albania), JONG CD&V (Belgium) and MHDZ (Croatia), calls on the EU, Member States and neighbouring countries to share best practice, activate the networks specialised in securing safe hospital facilities and the networks for high security laboratories to ensure all Member States can access laboratories to diagnose Ebola Virus Disease (EVD). Additionally, the resolution calls on the Member States to provide information for travellers, create specialised groups composed of medical staff to treat Ebola, and have them present in as many facilities as possible such as airports, cross country borders. Most importantly, it calls on the prioritisation of political action to encourage cooperation in preventing0 outbreaks in “peace” time and to facilitate actors to act early without fear of reprimand.

YEPP emphasises the need to build upon humanitarian aid efforts, in particular taking into account specific actions undertaken by Commissioner for Humanitarian Aid and Crisis Management, Christos Stylianides, and to significantly step up development cooperation efforts, especially when it comes to supporting and strengthening health systems in affected countries in the long term. All actions need to ensure that the 20 percent benchmark for basic health and social services in the EDF’s National Indicative Programmes for the next programming cycle is respected.

MEP Davo Stier said “I strongly support YEPP’s efforts and will do everything in my power to include your proposals in the report on The Ebola Crisis: The long-term lessons and how to strengthen health systems in developing  countries to prevent future crises. I call on you to be actively involved in creating the EPP postion”. YEPP Brussels Group chair Luis Viegas Cardoso added that “YEPP and the EPP Group are working together to put forward policies from the priorities of our 60 member organisations across Europe”