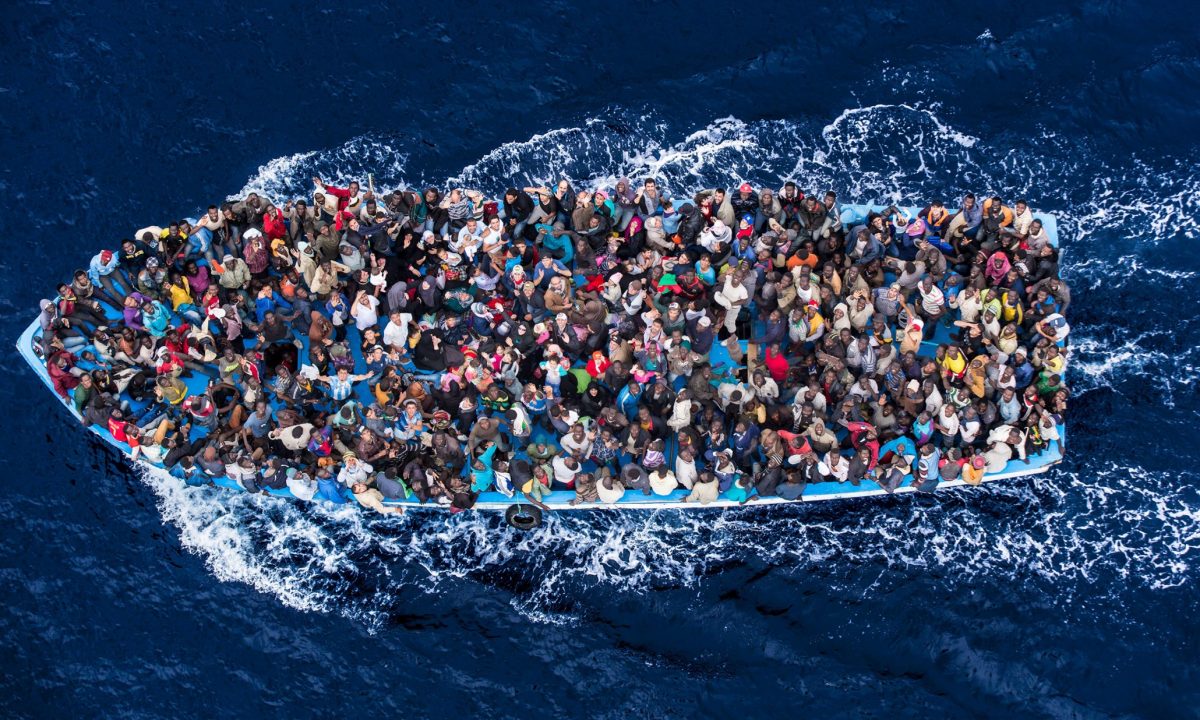 African asylum seekers rescued off boats and taken aboard an Italy navy ship, June 8, 2014. Photographer Massimo Sestini accompanied the Italian navy on its rescue missions earlier this month, offering a rare up-close glimpse of the men, women and children who make the dangerous trip to start a new life. Eight months after a boat carrying hundreds of migrants sank off the coast of Lampedusa, killing more than 360 people and spurring an international outcry, the flow of migrants risking the perilous sea journey to Europe shows no signs of letting up. Already this year, the number of migrants arriving by boat on Italy’s shores has surpassed 40,000, the total number of migrants that arrived in 2013. Earlier this month, Italy said it rescued some 5,200 people in the span of just four days. Officials there warn that many more will die without broader support from across Europe. Tens of thousands of refugees and migrants make the journey to Europe annually, departing from dozens of countries in Africa and the Middle East, according to the European Parliament. In recent years, Syrians fleeing the civil war in their country have joined the ranks of Eritreans, Sudanese and Somalis looking for a better life, the UN said in April. Credit: Massimo Sestini / eyevine For further information please contact eyevine tel: +44 (0) 20 8709 8709 e-mail: info@eyevine.com www.eyevine.com

The European Union’s greatest achievement is long-standing peace. Today, a region next to us is facing an unprecedented catastrophe from the ISIS terrorist forces and the Bashar al-Assad regime.

In dealing with these oppressors, we are faced with the politics of fear or the politics of dignity. Refugees are fleeing Syria with the hope of saving their lives, and the lives of their loved ones. Europeans know this feeling very well.

We share the concern of those citizens who fear the difficulties of integrating and assimilating refugees, the financial burden to countries already troubled by the crisis and the fear of terrorism rising in Europe from those jihadists who flee along with the innocent refugees.

At the same time, this does not stop us from giving a helping hand to the refugees of war zones. We have a responsibility towards those whose lives are threatened, and we need to separate them from those who are trying to abuse our asylum system.

The Youth of the EPP calls for:

Adoption of the Juncker proposal for mandatory distribution among member states for the 160.000 refugees. We call on all Member States to participate.

The EU and the Member States to demand involvement and immediate action from the United Nations.

The EU’s High Representative to begin talks and aim for an agreement with the league of wealthy Arab States so as to provide asylum under a shared framework.

The Dublin Regulations to be revised with a fairer system of distribution that takes into account the member country’s size, its geographic location related to the refugee flows, its economic situation and the number of migrants already present.

Setting up “reception centers” in the countries of origin to create a safe, humanitarian passage to Europe for those who need it. Refugees should be able to apply for asylum without risking their lives at the hands of human-smugglers.

The European Commission and FRONTEX to provide logistical help to transit regions so as to manage human flows and integrate their share of refugees.

Refugees wish to return to their country of origin; live, create and prosper in their own land. As long as ISIS and Bashar al-Assad oppress the Syrian people, these refugees don’t have this option. While we can provide a safe haven for them at the moment, there’s a limit to how many we can sustain; and this should not stop us from helping.

It is time for Europe to deal with this tragedy with commitment and responsibility. We call for the international community, under the coordination of NATO, to put forward military intervention in Syria. The Syrian people deserve to live under the rule of law in a free and democratic state. Ignoring the problem will only result to more refugees indefinitely, a prolonged drama for both them and their hosts.