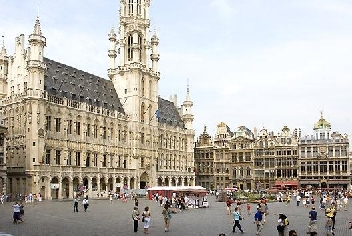 YEPP’s Working Day on the 9th of April 2011 took place in Brussels, Belgium on Saturday from 10 am until 5 pm. It was a working day dedicated to YEPP’s political programme already discussed in Caserta and statutory reform. The delegates discussed and voted on amendments for the bulk of the working day after the visit and question time with the EPP lawyer who came to explain the rewriting of YEPP’s statutes to comply with Belgian law.
The event took place in the European Commission in the Robert Schuman Room. The participants were hosted by YEPP member organization from Belgium Jeunes cdH. They were taken at the invitation of Jeunes cdH for a private viewing inside the Brussels town hall at the Grand Place and to typical Belgian dinners in the city centre.