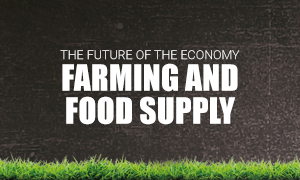 Europe’s agricultural sector is facing unprecedented challenges in the wake of digitalisation and automation, which are threatening the supply of high quality, affordable food on which 500 million Europeans rely every day. In addition to providing approximately 44 million jobs across the continent, Europe’s agricultural sector exports over 130 billion worth of agricultural products every year making the industry an essential element of Europe’s robust economy.

The rapid rise of technology has not only reshaped our way of life in urban centres, but it has also changed how farms throughout Europe’s countryside expand and how they process the food we eat. This continuous change has made it difficult for many small and medium sized farmers to compete with larger domestic and foreign farming industries. The immense capital needed to invest in new equipment or modernise existing infrastructure is a challenge that only the largest agricultural operations can overcome. Meanwhile, the European Union’s Common Agricultural Policy (CAP) works on an outdated framework that results in only the largest farms benefiting from the majority of support payments. Small farms, which make up around 50 percent of Europe’s farms only receive approximately 5.9 percent of distributions. Other issues such as generational renewal, land mobility, and ensuring sustainable operations present challenges that threaten the continued existence of the traditional European family farm. Faced with such difficulties, young farmers are often dissuaded from pursuing agricultural careers and instead seek alternative options. Currently only 6 percent of European farmers are below the age of 35. The resulting shortage of next generation agricultural workers generates serious questions about the continued security of Europe’s food supply. How can European policymakers better support the agricultural sector and enable young farmers with the ability to innovation and compete? This is the question that 85 young leaders from across Europe will endeavour to answer between the 3rd and 6th of May at the Conference on the Future of the Economy: Farming and Food Supply in Roeselare, Belgium.

Hosted by the Youth of the European People’s Party (YEPP) and the Jong Christen-Democratisch en Vlaams (Jong CD&V), the four-day event will feature various panel discussions and debates aimed at highlighting the importance of Europe’s farming traditions and the need to support agricultural innovation and sustainability that will allow for competition in a digitalised, automated world. President of the European People’s Party (EPP) Joseph Daul will deliver a keynote address on Thursday night to those in attendance along with remarks from Tom Vandenkendelaere, MEP from the Christen-Democratisch en Vlaams (CD&V). In addition to numerous resolutions dealing with European agricultural issues, participants will also discuss a new white paper on the Future of Agriculture in Europe, the final version of which will be part of YEPP’s current series exploring the future of various European issues.

Following YEPP’s new initiative to connect youth leaders with citizens, conference participants will experience three unique site visits to better understand how Europe’s food makes its way from farm to table. Participants will visit a working Belgian farm, the ARDO food processing plant, and the REO Veiling Vegetable Auction. These three visits will provide the young leaders with better insights into the operations of agricultural businesses and the opportunity to hear from the people who work in the sector every day.

“In light of today’s announcement of a decrease in CAP direct income support up to 3.9 percent and the impending restructure of CAP payments as a result of the Multifinancial Framework Proposal, it is vital to re-examine the future of farming in Europe and its cooperation with young people,” said Andrianos Giannou, President of YEPP. “We must change the way the we perceive the family farm and instead view it as an integral part of our modern economy and ensure its sustainability.”