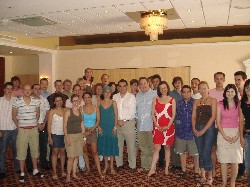 We have had our congress in Stockholm. A new YEPP Board is elected, we adopted a new political programme, as well as new statutes … A new team is full energy to continue our activities all over Europe.
YEPP held its yearly YEPP Summerschool in Limassol (Cyprus) from Wednesday, 27th June until Sunday 1st July 2007.  The summerschool dealt with the following topic: “European Neighbourhood Policy. The case of the Middle East”. High ranking speakers were talking and answering to questions related to the topic.
YEPP had also the honour to have Mr. Kasoulides, candidate to the Presidency of Cyprus as guest.
A small 60 delegates were present in Limassol. Politics was surely combined with pleasure in a Cypriotic way.
This seminar was hosted by YEPP Full Member NE.DI.SY Cyprus. This event is also a co-project with European People’s Party.