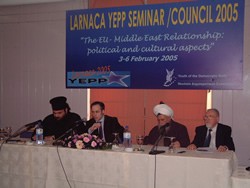 Approximately 90 YEPP delegates participated at YEPP Seminar/Council  in Larnaca (Cyprus), that was focused on “The EU- Middle East Relationship: political and cultural aspects”. The seminar was hosted by YEPP Full Member NE.DI.SY. Interesting to mention is that there were also representatives from Turkish Cypriot Youth Political Organisations.
There was a meeting with President of the Democratic Rally (DI.SY.) Mr. Nicos Anastasiades.
During the seminar different discussion panels were held.  Dr. Christos Iacovou, Middle East expert, discussed security and stability issues in Middle East . There followed a panel discussion of academics from the region, a Palestinian and an Israeli one,  professors Munther S. Dajani  and D. Levy. Also “Interfaith Dialogue” panel was held.  This panel included  Sheik Nazim Kiplisli (a Mufti based in Lefka ), Chief Rabbin Mordechai Piron from and Orthodox Archimandrite  Isaiah. Dr. Eleni Theoharous, MP and Observer of the Republic of Cyprus to the recent Palestinian Elections spoke next about the promotion of Human Rights and Democracy in the Middle East , an area that truly is of interest to the European Union. The delegates were gently guided through the problems and constraints of the EU Neighbourhood Policy on Middle East by the former Minister of Foreign Affairs, Dr. Ioannis Cassoulides (MEP).
All delegates went also Nicosia for an official visit to President of the Republic Mr Tassos Papadopoulos who presented and analysed in depth the views and perspectives of the government of on the latest political developments in after the referenda of April 2004.  Afterwards the delegates were given a short tour close by to the green line.  On Saturday the working groups and the plenary/council meeting took place.
Enclosed you can find the final programme and the approved documents can be found in the box “Documents and Reports”.