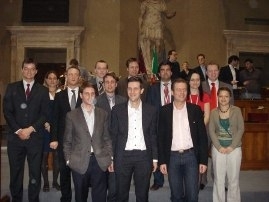 YEPP gathered from 2 to 5 April 2009 in Rome for the 7th YEPP Congress. We had the honour to be hosted by our 3 partners and full members in , Forza Italia Giovani, Giovani UDC and Giovani UDEUR.
The Congress serves not only as YEPP’s highest statutory body, but also as forum for getting to know like-minded centre-right young politicians. The contained several inputs from European political players including Mr. Gert-Jan Poëttering, Chairman of the European Parliament, EPP-President Wilfried Martens and many other high ranking guests.
On Saturday, 4 April a new board was elected and several resolutions adopted.