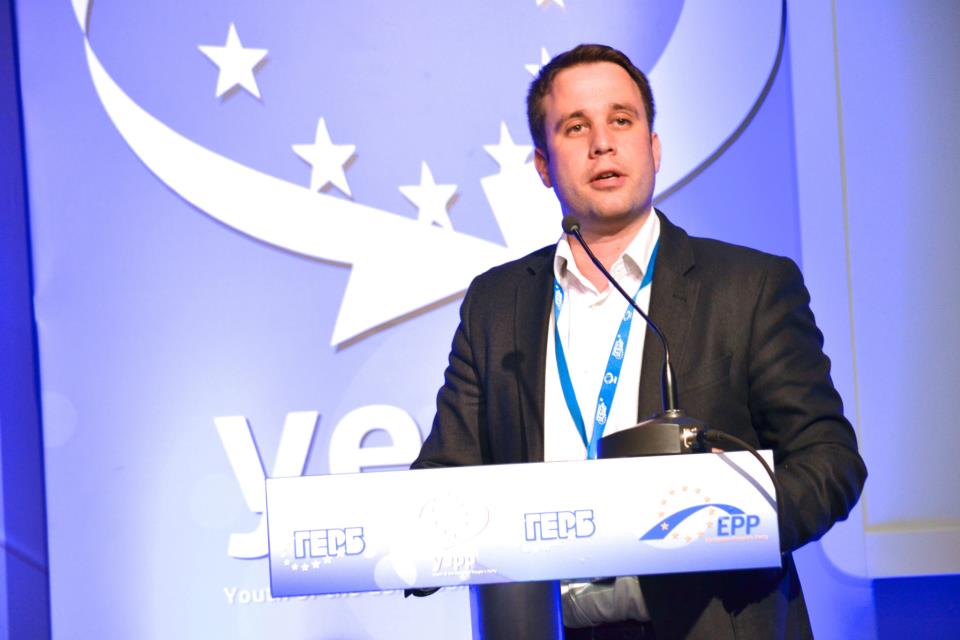 “We cannot be the next generation if we take it for granted. No great generation was born without fighting hard for it. But I am optimistic. I believe you can be the next great generation, because YEPP is now much more than a group of talented individuals, it is now a great community of committed people willing to fight for each other.”
My friends,

I agree with those who say: a good farewell speech should be like a woman’s skirt. Long enough to cover the subject and short enough to create interest. I will try to stick to this rule.

This is my last opportunity to speak to you as YEPP president. I am sure, we pass behind a remarkable track record, I think our family has risen to quite some new challenge.

When we stood in front of you in the Berlin Congress 24 months ago, we made some pledges. We promised to make YEPP politically stronger, more open and more visible. I am proud to say that working together, YEPP has done well in achieving this.
Instead of a dull report full of numbers and statistics, let me simply say that these two years were years of the first times in many aspects.

Here we go with some examples.

For the first time, we launched a direct campaign to reach our own prime ministers in an important issue, the Erasmus program. Our letters sent to them might have contributed to solve the payment difficulties last year. Never before had we had such a campaign.
For the first time, based on our electoral promise, we organized the Brussels Study Days, which is meant to be long lasting instrument of ours. I hope that the next board will also carry on this event, because it can ensure louder YEPP voice in the capital of Europe.
For the first time, we awarded the Freedom Prize, This prize is meant to highlight the efforts of young democrats fighting for freedom all around the world. This first award was given to a Belarusian activist, who is still in prison in the last dictatorship of our continent.

For the first time, we successfully lobbied at the EPP to adopt a position on how to fight youth unemployment. We can be proud of that fact that the latest EPP position in this matter comes from us. The points laid down there – tax cuts, reducing bureaucracy, promoting young entrepreneurs, higher education reforms, remain relevant for the future as well.

For the first time, we could take part in the debate of EPP’s long term strategy, which was adopted last autumn. Thanks to our activity, there is now a greater focus on youth issues in this strategy paper, which is meant to be written for a decade. Maybe thanks to this activity, for the first time, YEPP gives a co-chair of an EPP working group, the WG on internet security.  This is an evident proof of a greater respect for YEPP in our mother party.

And some more first times.

For the first time, we had a face-to-face debate with a Commissioner. The meeting with Commissioner Reding went much beyond the usual polite protocol meetings. The debate with her on female quotas is one of my nice memories from last year. We could also trigger an internal debate on the next 7 years EU budget. The letter we sent to MEPs was mentioned many times in the European Parliament. In that, we were pushing for a rapid deal between the Parliament and the Council.

I think it was also the first time that we dared to get into political communication fights with left-wing EU politicians. We debated with a communist MEP who said the Socialist revolution was great and raised our voice regarding the political double standards of Socialist MEPS when they regularly attacked EPP governments.

Last but not least, for the first time YEPP nominated a vice-president to the EPP.  Lucinda Creighton, a former board member of ours, was elected by most votes in Bucharest: a result, which made us all very proud. She is now the voice of the youth in the board of the biggest European party.

The list of bigger and smaller successes could be continued. But what is more important, this was not a one-or-two man show. We could work as a real community. Because of all this, I would not like to name anybody here. You all know which board members worked the most. But I have to say, everybody contributed to our achievements. Therefore, a big thank you goes out for the wholehearted board members. You made a difference, thank you for that.

Today is the time to say goodbye, but goodbyes are sad so I’d rather say hello. Hello to the new adventures of YEPP. Everybody will be needed on board.

Let me leave you with 3 goals for the future.

First, you have to continue to be the voice of the youth in Brussels and beyond. It’s essential that you raise your voice in all the issues that concerns our generations. To be successful in this, you have to translate Europe. You have to break away from the bureaucratic language of institutions. So instead of saying holistic approach, MFF, enhanced dialogue, CFSP, synergies, directives, co-decision and all the alike, I invite you to use a language that is easily comprehensible to everybody. Like you always did here in YEPP.

Second, the European People’s Party badly needs a new narrative, a new story. A story that can be shared and loved. You can be the ones that find it out. We cannot be satisfied by saying we are the biggest party or the biggest political youth organization, because it will make us a target of permanent criticism the time of crisis. To find out our new narrative for the future, we have to gain strength from the past centre-right successes: peace for decades, making the Berlin wall collapse, no borders, enlargement and so forth.

Last, but not least, we have to give again content to the words: common values. Working in Brussels for many years, I heard this expression quite a few times. But everybody meant different things about it. So we, as a centre-right family has to be more firm about what we believe in:

We believe in communities – families, religion, and a strong European community of nation states.

We believe in traditions, because without the respect of our traditions we have no roots in life.
and

We believe in freedom, because our ancestors fought for centuries to realize it is never for granted.

So I invite you all to do this homework: be the voice of the youth and translate Europe, find out the new narrative of our political family and give again content to our values. If you do this homework properly, we will be well prepared for our most important fight ever, the 2014 European elections. We have to switch to campaign mode.

When politicians come to our meeting they always say: you are the future leaders of Europe. The next generation – they say. Let me be provocative. We cannot be the next generation if we take it for granted. No great generation was born without fighting hard for it. But I am optimistic. I believe you can be the next great generation, because YEPP is now much more than a group of talented individuals, it is now a great community of committed people willing to fight for each other. It has to stay like this.

It was in 2005 that I first entered YEPP. Eight years ago. Yet another reason for me going now. During these years I learned a lot from you. Learned a lot about what it makes us to be a good European and a good patriot at the same time. I think I also learned enough to be prepared for my next challenge just as hard as leading an organization: being a father.

Definitely I will miss our hectic meetings, I will miss the tension before the council, I will miss the late night calls every day, and of course the hours-long-discussions. I realized in the last few days that I will even miss the legendary question YEPP people ask each on the first day:  Did you just arrive? When did you arrive? Did you have a direct flight?

My days in this office are through, but my days of service I hope are not. For a while I will never take any duty of which I will be more proud than that of leading YEPP. Coming from a poor region of a poor former Communist country, I could not have dreamt of a greater honor than to serve you here.

When leaving office, a great American president called his homeland „a shining city on the hill”. It was a city stronger than oceans, windswept, full of people of all kinds, with open ports to creativity.

From now on, for me, YEPP will be that shining city on the hill. I’ll leave you more full of hope, than the day I arrived and more confident that the best days of our family and Europe are still to come.

Thank you for these years, I will miss you all, God bless and see you soon.
(speech held at the 9th YEPP congress, Sofia, 11 May 2013)