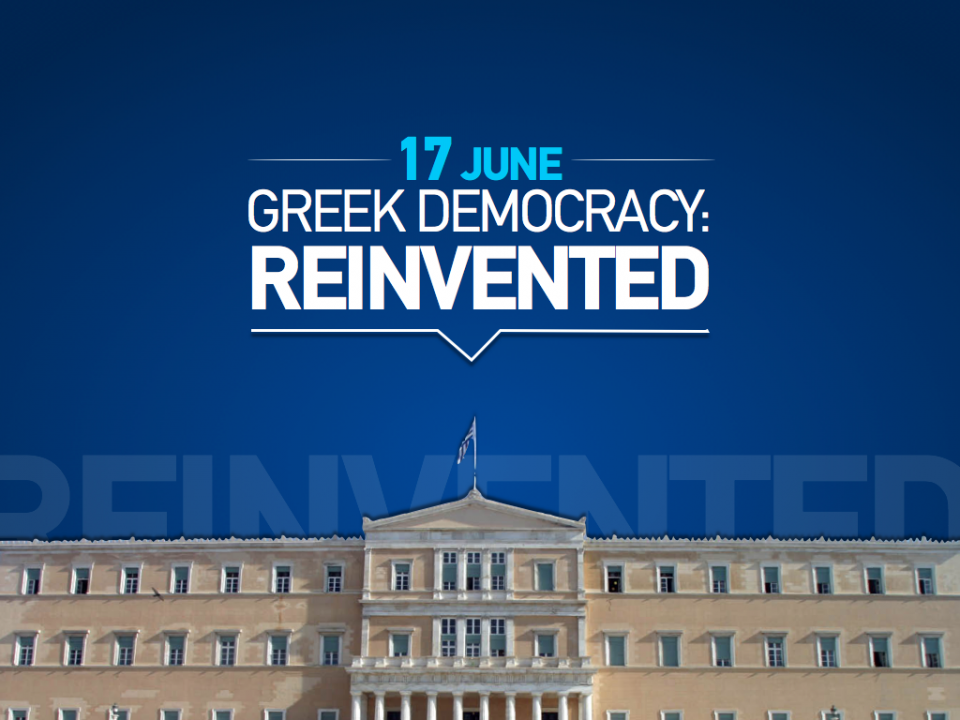 So what does Greece want?

Elections took place on May 6th, elections are taking place again on June 17th, in the same country, Greece. Why? Didn’t the Greeks have the chance to decide? Didn’t they show the way and expressed their preference to the policies they trust? Didn’t they choose what they want? The answer is no.

The Greeks might have expressed their voice, or at least 65% of them, but the result was nothing more than an anger vote, a condemnation of what they have seen in their country over the last 2 years, and some say, over the last 30 years. Nothing positive came out of this election. People said no to many things, but they did not say yes to anything and anyone. That is why the result is rather controversial. The 2 governing parties, Nea Demokratia (Center-Right) and PASOK (Socialists) lost in just 2 years more than 3 million voters and 45% of their political power. The “anti-memorandum” parties got 68% of the votes. Among them, the Golden Dawn (Neo-Nazi) got 7%, a completely new party without any specific program or ideology got 10% while the left increased its overall percentage to more than 30%. The political earthquake does not stop here though. A record high of almost 20% of the Greeks voted for parties that did not make their way into the Parliament, being unable to reach the 3% limit.

A different reading of the election result is that 35% of unexpressed voters, 19% of non-parliamentary parties and 3% of invalid or abstentions sum a proportional 50% of non-represented voters in the Greek parliament. One out of two Greeks is not represented. And this was the very meaning of the election on May 6th. Greeks have shown their mistrust to the entire political system. By voting or by abstaining. And those who voted, have only sent one message to the Greek politicians: Make Coalitions.

Coalition is a word missing from the greek political vocabulary.The election law, combined with the clientelism that ruled the political system has created over the past decades a mentality hard to explain. Greeks have thought so far that a single political party with no absolute majority among the electoral body, has the legitimacy to govern, reform and administrate without any other consultation but an election every 4 years. This is the fault both of politicians and voters. Greeks were not seeking for consensual policies, simply because they did not have to. Voters were always identifying a policy, good or bad, with a single party. Political faces, or even families, replaced ideologies. Opposition parties always had the luxury of condemning and refusing everything without offering alternatives. Governing parties always felt the pressure on behalf of the interest groups, consequently being unable to reform under the threat of losing voters. These last 2 years, clientelism has fallen as a result of the EU-IMF policies imposed. And so did the voters.

Greece has to choose

For the first time, elections campaigns are built with the argument of coalitions. And that is, in my opinion, a huge step forward for the Greek society and democracy, even if voters did not do it on purpose. The debate now is surely not about Greeks wanting to stay in the Eurozone or getting back their national currency, the drachma. Polls have shown that only 10% of the voters want to get out of the Eurozone. What Greeks really have to decide upon this time is something else. It is about a choice between 2 evils.

By choosing the pro-memorandum parties, Greece has one more chance to repair the economy, restructure the public sector, privatize the unproductive and damaging public companies, make the economy more competitive, under truly hard, unfair yet temporary austerity. The other choice is the anti-memorandum parties. They suggest the interruption of the international loans by the EU and the IMF, which consequently leads to default. Default according to these parties though is not as bad as described from the EU. It might transform the country into an economically handicap entity, but restarting a country has also a bright side. The German Minister of Finance, Wolfgang Schäuble said it right: “Greeks will go through hard times, no matter their choice on June 17th. This view is what makes Greeks feel so hopeless. And hopeless people have nothing to lose.

Europe has to choose

European leaders despite reacting in shock after the election result, they shouldn’t have. This is what happens in democracies when new dilemmas are created. There is a proposition and an opposition. When the EU pressurized without any specific reason the center-right party to join forces with the socialist party in a pro-memorandum coalition, the parliament was left without opposition. Instead of having elections as it happened in Portugal and Ireland and let voters decide responsibly on the program, Greece was asked to implement further austerity followed by completely unsuccessful results. The latter happened without any democratic legitimacy, by politicians and technocrats unelected for this purpose. Consequently, it was more than expected, that voters would punish that practice. And they did.

This is maybe the reason, that the EU leaders, even the European People’s Party has, for the first time, declared readiness to renegotiate the program and find a more sustainable solution for Greece. Most parties now in the country base their election campaign on this very renegotiation. Of course there are still governments in the EU that refuse any renegotiation insisting on the “punishment policies”, but these voices only harm the debate in Greece. The EPP and most of its member parties, have said that they want Greece to stay in the Eurozone. That a possible exit of a country could lead to the end of the Eurozone. That they are willing to take all the necessary measures to keep Greece inside the Eurozone. There is not much to say though, before June 17th, as Europe is going under change not only because of the situation in Greece but mostly because of the election of Francois Hollande in France. Unstable governments in Italy, Romania, the Netherlands and the continuous crisis in Spain and Portugal, compile, all together, a very threatening image. The need for change is not negotiable and Europe has to choose how.

The elections of June 17th in Greece will most probably result to a coalition. A coalition of the center-right or a coalition of the left. The first will bring more stability to the EU and the markets, the second one will create the opposite. There is no question about that. What Greeks really expect from this election though is to see their politicians finally being able to sit at a table and agree. Greece needs a more consensual political model, and only these elections can create it. Politicians need to realize that the era of clientelism is long gone, so do the voters. Politicians need to decide upon the way of politics they want to exercise. People need to decide upon the model of life they want to have. Young people need to decide upon their future. Greeks need to decide, not if they want to stay in the Eurozone, but which is the best way to achieve it.

Choosing what they want is definitely the right of the Greeks, but it is also their great responsibility. In the end, the silver lining of the crisis is not that the Greeks will get to decide what is the best way to solve it. It is that they can change their political system. Forever.
___
Published on Instytut Obywatelski