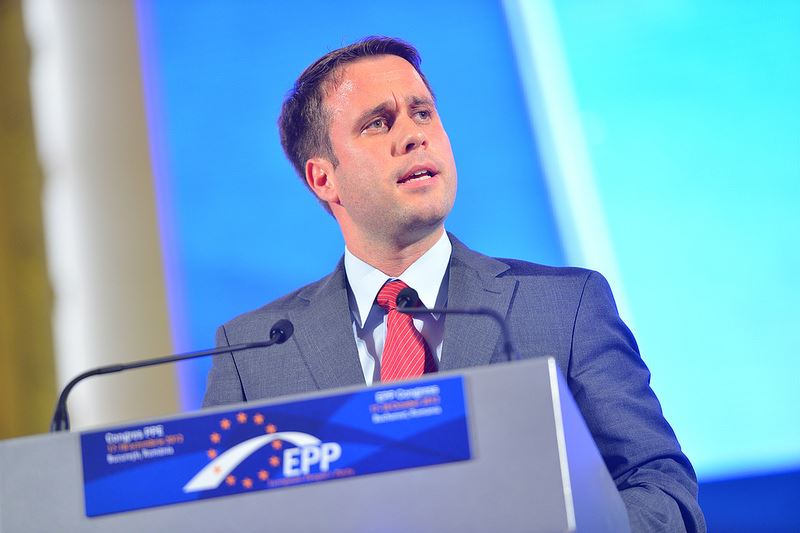 In the past two years, EPP encouraged us to put forward new ideas. This was an opportunity YEPP could not let pass. So instead of a regular report full of self-appraisal, allow me to raise some political aims we should write on our flag in the coming years.

The first expression on the flag should be –not surprisingly- job creation. Further efforts are needed from our side. Especially as youth unemployment reached an alarming rate. We would like to see the extinction of newspaper titles about the jobless and lost generation. To achieve that, the legal burdens on labor have to be reduced by all means, while education systems should be more adjusted to the real demands of the market.

The second priority on the flag is debt reduction. We would urge EPP to continue to commit itself to further reduction of public debt, since this is another significant obstacle to Europe’s economic recovery, sometimes putting unbearable weight on our citizens, young and old alike.

The third word on our flag should be demography.  We have to put this issue back in the mainstream of the agenda. Maybe it’s a bit blunt, but with the current low birthrates, our countries cannot expect lasting economic stability and security. The protection of families therefore deserves a unique attention.

Young people, who wish to start a family, – I am definitely one of them actually – rightly expect to receive active support. Who else if not EPP could take a lead in this?
So on behalf of YEPP, I would like to ask EPP politicians present here, to embrace these aspects – tackling youth unemployment, debt reduction and the protection of families. Not the least, we ask you to preserve the youth programs that proved to be successful in the past, like Erasmus. Today, we would contact all heads of governments with regard to guaranteeing the future of this successful program.

There is one last thing we should discuss here. The issue of our political rivals.
If we take a look around in Europe, we see centre-right governments making painful, but necessary decisions. On the other hand, we see left-wing parties doing nothing but heavily attacking us and pushing for populist decisions. When I see their Youtube video on solidarity, hear their slogan reinventing the word growth, bump into their activists demanding youth guarantee, I say to myself, you’re gotta be kidding me. Let’s make one thing clear. These are the same parties that left a huge mess behind after they governed. In my country, when Socialists took power, the level of public debt was 50%. Some years later when they left, it was more than 80%.

That is why, it is important to name and shame those left wing parties that are largely responsible for the current economic hardships. I think, EPP has to switch to campaign mode, put on the campaign helmet and make the final preparations for the 2014 elections. On behalf of 56 organizations of the EPP Youth, I would like to offer all our enthusiasm in this political battle. We are also proud to present our first candidate, Lucinda Creigthon to the EPP Presidency, who will fight with us for youth issues.

Not long ago, I saw a graffiti on a wall. It said: there are two things we can give our children. One is roots, the other is wings. It’s true. And since EPP is a party with stable roots, there is nothing left for the youth, but to provide the wings.
Thank you.