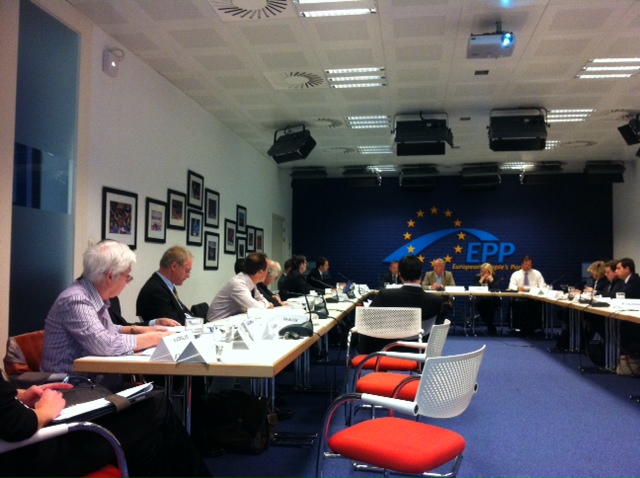 Last Monday, I attended the June meeting of the EPP’s Working Group 2, Economic & Social Affairs, at the EPP headquarters in Brussels. YEPP’s participation in this working group has grown and developed over the last few years and valuable contributions have been made on a variety of topics. YEPP was particularly grateful for the support of the Chairman or WG2, Gunnar Hökmark MEP, with a number of resolutions YEPP presented in 2011.

The only topic up for discussion at Monday’s meeting was “Structural & Cohesion Fund”. These EU funds are aimed at Member States whose Gross National Income (GNI) per inhabitant is less than 90% of the EU average. They serve to reduce their economic and social shortfall, as well as to stabilise their economy through targeted investment in infrastructure and development. The discussion was related to the approval of the working groups draft resolution on the “Single Market and Cohesion”, which is to be presented to the next EPP Congress in October 2012 being held in Bucharest.

The resolution does not propose anything radical or explicitly new, however crucially it urges consolidation, simplification and streamlining of various EU policy in how it appropriates and designates funding for cohesion projects. The resolution targets particular areas under eight headings;

1. Enforcing single market legislation – this essentially calls on the Commission to be tougher in ensuring the implementation and enforcement of all agreed rules in member states as current infringement procedures take too long and ‘reward only the sinners’.

2. A new strong impetus is needed make free circulation a reality – this calls on the Commission and Member States to abolish all remaining obstacles to the free circulation of goods, services and workers, i.e. the Services Directive.

3. Free movement of persons – this suggests that the EU should foster labour mobility to create a more integrated and open European labour market and call on Member States to open up closed professions for competition both from within a country, and from worker/professionals from other Member States.

4. Cutting red tape – this is a policy close to YEPP’s heart and an area we have pushed for many years. This policy aims to make it easier for businesses and individuals to go about their business, pay taxes, create investment and jobs. The EU, for many, is viewed as a bureaucratic nightmare and the EPP has been to the forefront of cutting red-tape in EU institutions and in assisting the EU in reducing these unnecessary bureaucratic elements by 25% by 2012. YEPP strongly welcomed this point.

5. Digital single market – this highlighted the importance of fostering growth and investment in the high-output digital and internet sectors in the EU and calls on the EU and its Member States to speed up the approval of a Single European Patent to ensure these new ideas, innovations and designs are protected.

6. Energy sector – this calls on the EU deliver on the EPP commitment to establish a genuine, efficient and effective internal market in energy by 2014.

7. The establishment of the European Research Area

8. Structural reforms in EU Member States – calls on the implementation of necessary structural reforms to improve the needed fiscal stability to encourage job creation, investment and competition within Eurozone and wider European Union.

The next WG2 meeting will be held on the 20th June in Brussels. The resolution, again, will be the only item on the agenda and it is hoped to develop a more final version that will be presented at Congress 2012.