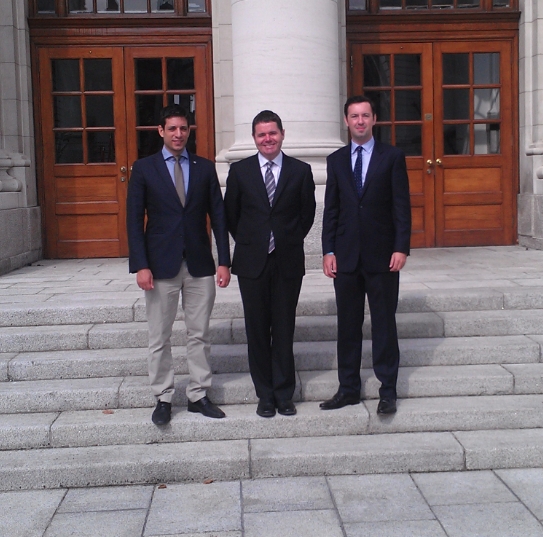 The leaders of the Youth of the European People’s Party (YEPP) have today (Monday, August 26th 2013) met with politicians in Dublin in relation to the issue of youth unemployment.

President of YEPP, Konstantinos Kyranakis, and Secretary General, Colm Lauder, met with Minister for European Affairs, Paschal Donohoe TD, at government buildings this morning. During the hour long discussion, Minister Donohoe was presented with YEPP’s proposals to tackle the problem. Minister Donohoe commented on the serious nature of the problem, and has invited YEPP to continue to play an active role in this discussion, both in Europe and in individual member states.

Mr. Kyranakis and Mr. Lauder also met with Damien English TD, Chairperson of the Joint Committee on Jobs, Enterprise and Innovation. The Action Plan for Jobs was discussed, as well as the success of several government programmes aimed at making more young people employed. Deputy English welcomed the proposals from YEPP.

Kyranakis said “Youth unemployment is an issue which is extremely prevalent across Europe. It must be taken seriously by not only European politicians but also national politicians to ensure that a generation of young people across Europe are not lost to unemployment and the attached negative consequences. YEPP believes that while the youth guarantee which is seen as a silver bullet by many, it is not the optimal solution.”

Mr. Kyranakis and Mr. Lauder also met with members of Young Fine Gael in relation to the upcoming EPP Congress which will be held in the Convention Centre in Dublin in March 2014.