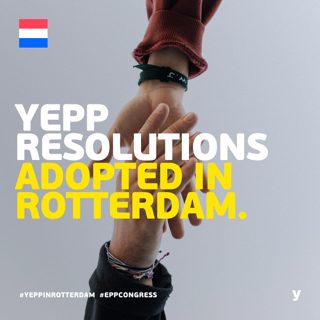 ‘Rebuilding Transatlantic Relations through Building Relationships: YEPP calls for an EU-US Youth and Academic Exchange’ was YEPP’s first resolution which was adopted. This resolution initially passed at our last Council Meeting held in Stockholm, April 2022. It is unquestionable that the United States and the European Union share a common history and are the closest economic partner to one another. Yet, within the last years we have seen a decline in the relationship between both global powers. YEPP is aware that a solid transatlantic partnership is essential for future decision-makers and leaders of both global powers. Thus, this resolution urges the present leadership of the need to create a ‘Transatlantic Erasmus’ to foster stronger ties between both, particularly through creating a common bond and cultural exchange between the youth of the US and the EU.

The second resolution adopted is titled ‘A forceful and instant initiative for a united free, democratic world in a new trade agreement’. Within the resolution, YEPP recognizes that free trade is a guarantor of economic advancement worldwide and the necessity for the EU to ensure it is not left behind. To do so, the European Union must develop its industrial potential through both digital and green means. We must ensure that the Union is not left behind, and becomes a leader and not a follower in world trade. Additionally, the COVID-19 pandemic has highlighted the EU’s dependency on certain goods as most marketed in Europe are produced outside its territory. Consequently, YEPP calls on legitimate bodies to make the implementation of new trade policy a priority as well as foster reindustrialization to make Europe less reliant on global production and supply chains. This is to ensure that the European Union remains a political and economic leader, today and tomorrow.