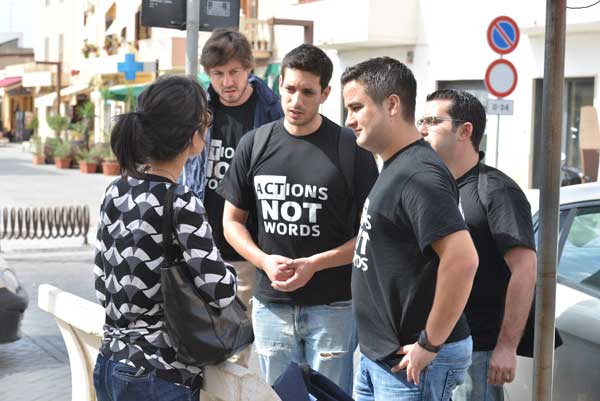 On the night of the 23rd October, a YEPP Mission sailed from Malta to Lampedusa. Led by Kevin Plumpton, president of MZPN (Malta) along with the president and vice president of YEPP, Konstantinos Kyranakis (Greece) and Riccardo Pozzi (Italy), the mission arrived on the island where the recent human tragedy took place.
YEPP delegates spoke with locals and immigrants and visited the detention centre where asylum seekers and their children are held. The delegation met with authorities and spoke to media on the day an important EU Summit convenes to discuss the problem of illegal immigration.
The Deputy Mayor of Lampedusa said: “This tragedy has brought a lot of sadness but these people did not die for nothing. Now that all lights are on our small island, it is time for Europe to face the problem as a European one and show that we can function as a Union. We ask of YEPP, as young representatives, to push your policy makers to understand the roots and causes of the problem and act decisively”.
The President of YEPP, Konstantinos Kyranakis stated:
“We came here to this island with a real sense of respect and admiration to the Lampedusian people who, despite being in the center of the problem, have offered great hospitality to the refugees who need their help. Europeans should know about this great example of human spirit that is happening here every day. We chose to be here on the same day as the EU Council is discussing the issue of immigration, external borders and asylum seekers in order to call for:
On one hand, the EU Agency FRONTEX should implement its role and act as a real European coast guard with a focus on the routes in the Mediterranean Sea. No human trafficker should have the illusion that it is possible to enter into European territory illegally. The operational department of FRONTEX should get more training and equipment, while controls should be more frequent. There is no other way to avoid another tragedy than to stop human traffickers attempting to cross the borders. Stricter sanctions should be imposed to human traffickers on a national but also on a European level.
On the other hand, the EU embassies in the countries at war, or other extraordinary situations, should facilitate for those refugees who have real reason and need to apply for asylum within the European Union. The EU, after reforming the unfair and problematic clauses of the Dublin II regulations, should create a balanced system of fair distribution for the asylum applicants. This system should be based on population and infrastructural capabilities of each member state. Immigration centers like the one in Lampedusa should operate under EU law and funding.
The problem of irregular immigration is a European one and this is why YEPP is asking for a European solution. We will act with responsibility for the EU citizens and with solidarity to the human beings who wish to come to Europe seeking for hope.”