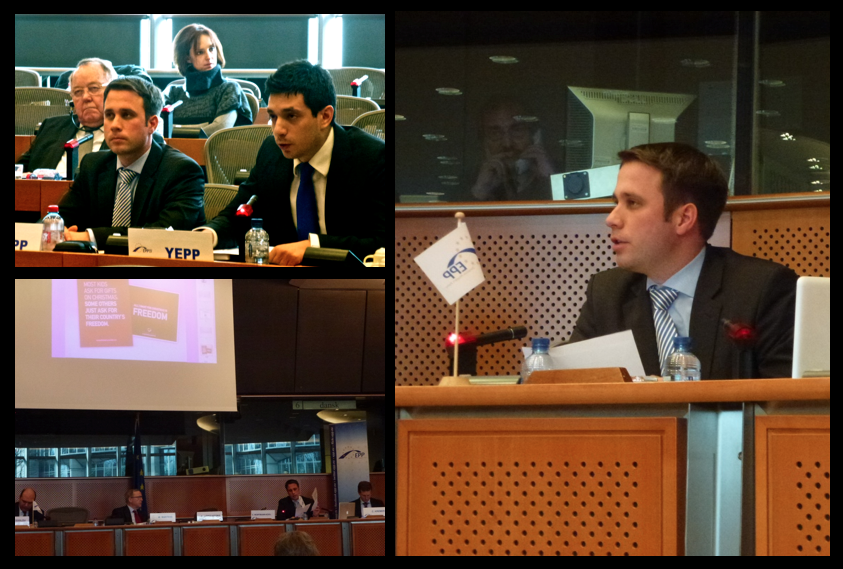 YEPP is on the move, said YEPP President Csaba Dömötör in its first annual report in the EPP, which was welcomed by the delegates of the Political Assembly. At the same time, YEPP’s resolution on internet data protection was adopted by an overwhelming majority.
Csaba Dömötör highlighted that YEPP had 7 major events in the last year, where almost all of the 57 member organizations of the centre-right movement took part actively. He underlined that the current board of YEPP promised more political activity in Brussels. Therefore a much bigger focus is given to the agenda of the European Parliament as well as on the activity in the EPP. This can be proven by the contribution to the EPP congress document or the submission of the resolution on youth entrepreneurship during EPP’s last congress in Marseille. Csaba Dömötör referred to the first conference of European political youth organizations that took place some days ago on YEPP’s initiative.
The President also emphasized the organization’s brand new visual appearance, while mentioning that YEPP has now more training sessions than before. The President raised the issue of young prisoners in Belarus, which is a permanent focus for the EPP Youth. As for the current political issues, Csaba Dömötör declared that YEPP is interested in a close follow up of the European Council conclusions on youth unemployment. He said that YEPP would soon adopt a declaration in this issue that would be followed by a white paper containing more detailed proposals.
Soon after the annual report, the delegates of the Political Assembly discussed the resolution on internet data protection submitted by our organization. Vice-President Konstantinos Kyranakis highlighted that there is a great need for a new legislation since the current one dates back to 1995, therefore it is outdated.
The resolution, adopted overwhelmingly by EPP delegates, calls on European institutions to modernize the provisions of the directive in effect, while calls on all Members states to steadfastly move towards the further cohesion of national data processing legislation, following a single leagal framework that will save up to 2.3 billion euros currently spent due to administrative burdens. The resolution also promotes the “privacy by design” principle, which holds that privacy must be ensured throughout the entire lifecycle of date production.
YEPP finally introduced a completely new idea for a reliable EU security trademark for all online payments made on European companies’ websites. The new mechanism would bring more trust in the digital market, attract non-EU buyers and, consequently, stimulate growth.

You can read the resolution here: http://images.europaemail.net/client_id_5328/PA0212YEPP.pdf
The next EPP Political Assembly will take place in June.