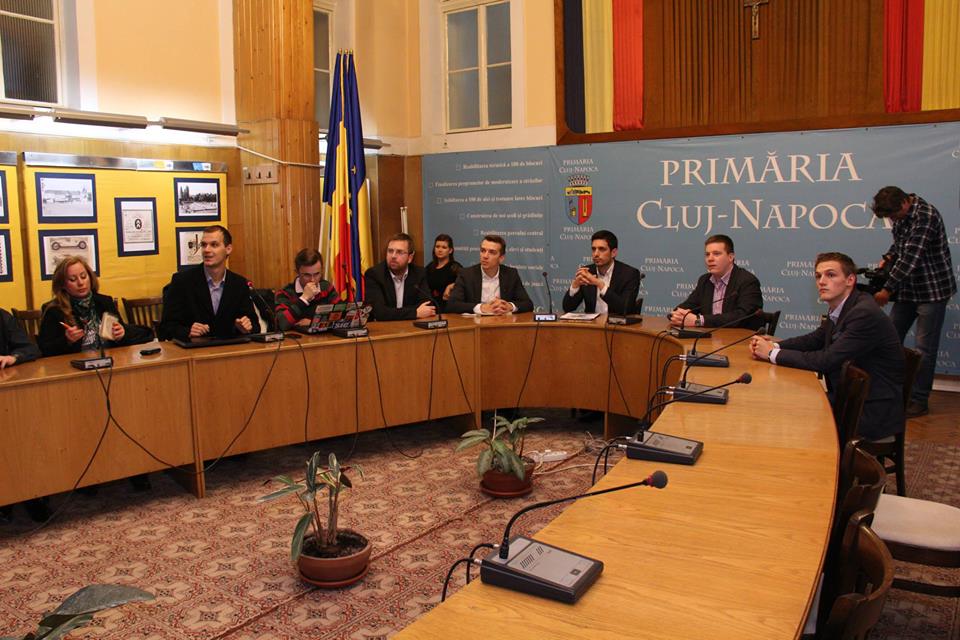 On Monday, the 18th of November 2013, Konstantinos Kyranakis, president of YEPP, held meetings in Transylvania, Romania with the organising committee of the ‘European Youth Capital 2015 – Cluj Napoca’ and local authorities. YEPP and it’s member organisations discussed ways to actively partake in the preparations of the youth activities that will take place in Cluj. Vlad Pop, project manager of the EYC 2015 together with representatives of Emil Boc, Mayor of Cluj-Napoca, members of TDL and representatives of MIERT, presented the plans for the year-long activities and discussed common initiatives. Anna Hovarth, deputy mayor of the city, presented the political priorities for 2015 and explained the importance of international events for the city of Cluj-Napoca.
Moreover, Konstantinos Kyranakis took part in a press conference with the deputy-president of MIERT, Adorjan Jakab and the youngest Member of Parliament from RMDSZ, Molnar Zsolt. Molnar officially joined the alliance of young MPs that YEPP is building around its Job Creation Plan and highlighted the importance of jobs for the country and the region.
Konstantinos Kyranakis made the following statement:
‘It is very satisfactory for us to see our alliance growing, as jobs is the number one issue for us in YEPP. Our member organisations in Romania are doing an excellent job working together towards this common direction. Just one month ago, the Job Creation Summit that we held in Bucharest marked the beginning of the alliance with TDL, and its leader Sorin Moldovan, being the first organisation presenting a national plan based on our 3 priorities. Today, with MIERT joining the fight, and with the commitment of its elected representatives, we believe that there is a realistic chance for our plan to make it into parliament if legislators from both parties work with determination towards that direction. We are doing our best to establish the role of YEPP as a policy-maker and we will not stop campaigning for our plan until we see the numbers of youth unemployment dropping.’
After the meetings, Konstantinos Kyranakis spoke to students of the Sapientia University of Cluj-Napoca about the importance of youth politics, presented the YEPP campaigns and discussed with the students about their priorities. The meeting was organised by MIERT and its international team in the presence of Gered Imre, the youngest local councillor of RMDSZ, who also took part in the discussion.