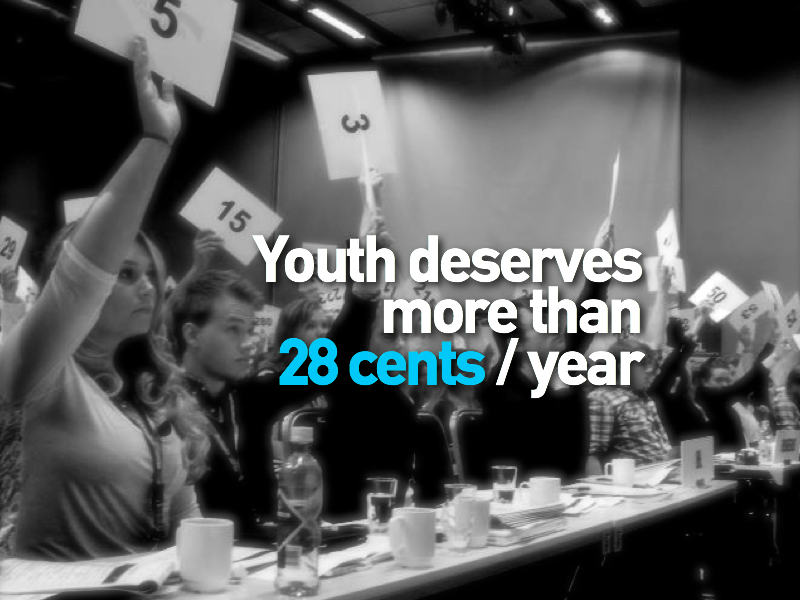 On 28th and 29th June, European Union leaders will meet for a crucial summit to decide on the lines of the next EU budget. The European Youth Forum calls on the Heads of State and Government of EU Member States and European Council President Herman Van Rompuy to make the right choices for Europe at the upcoming European Council meeting. Europe must invest in its youth.
Europe is at a crucial juncture with the current financial and monetary crises, and the decisions taken at the upcoming EU Council meeting by our leaders will no doubt have a strong impact on the hopes and destinies of many citizens and residents of Europe, especially young people.
Setting a budget for the EU for 2014-2020 is a big challenge, and the right choices have to be made. The vision of a sustainable and prosperous Europe cannot become a reality without the work and vision of young Europeans. A visible, strong, and comprehensive investment in young people has to be a key priority for growth, stability, and wellbeing of our society as a whole. We need a brave new deal for youth!
Not investing in Youth is costly. According to Eurofound, in terms of foregone earnings and excess transfers alone, youth unemployment costs the taxpayer approximately 100 billion euro per year in 21 Member States. But these are only some of many of the costs that the Union and its Member States incur by not adequately investing in youth. Taking into consideration the overall economic and political impact of lower rates of active citizenship, early school leaving, and poor access to social services, the cost of the social exclusion of young people could soon become insurmountable.
On the other end, in the current budget of the Union, youth is definitely not a priority. Currently, only 0.1% of the EU Budget is used to provide funding to youth programmes. This becomes even more apparent when comparing the current Lifelong Learning Programme, which has a budget of only 7 billion euro for its seven years duration, with other EU programmes. The money dedicated to the Youth in Action programme for the overall cycle of 7 years is less than the amount spent by the EU on subsidising the wine sector in the single year of 2011. This has to change.
“We call on Member States not to freeze or cut the EU budget in order for it to support the autonomy and the rights of young people in Europe, to think long-term, and focus on including young people in the future of our society” stated YEPP President Csaba Domotor and Youth Forum President Peter Matjašič in an open-letter addressed to the European leaders and co-signed by party-political youth organisations and EU national youth councils.