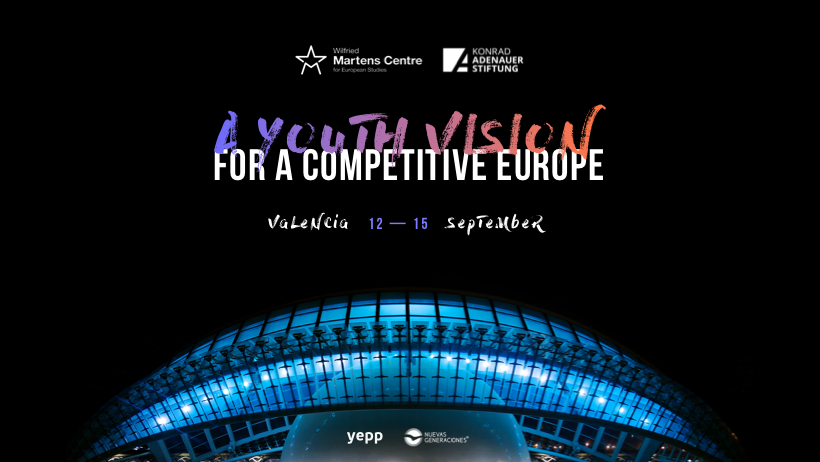 Valencia, Spain – This weekend will see members of the Youth of the European People’s Party (YEPP) come together for ‘A Youth Vision for a Competitive Europe’ conference which will be held in Valencia, a city known for its culture, heritage and architecture.

Throughout the course of the weekend, YEPP participants will get to debate in the world renowned City of Arts and Sciences building which is also known as one of the twelve treasures of Spain. Delegates will get to debate and discuss their ideas on what they hope to see in the future in regards to the European trade environment amongst many other topics. There will also be a more light-hearted debate in the House of Commons-esque style which will be moderated by Chris Burns, who has more than thirty years experience in both journalism and moderating debates including for the World Economic Forum, OECD, World Bank, UN, European Union and the Women’s Forum.

Delegates will also have the opportunity to visit the Lanzadera Plant, one of Spain’s retail giants and business incubator. YEPP participants will also get to hear from a number of prominent experts from the private and political sector. On Friday, there will be a panel discussion called “Brexit or hard Brexit: winners and losers”, where delegates will hear from distinguished speakers including Eoin Drea, Senior Research Officer from WMCES Valentina Martínez, International Secretary, Partido Popular on the pivotal issues surrounding Brexit and its impact on Europe.

The conference is a fantastic opportunity to facilitate discussion between young people from all across Europe. More than 80 delegates from 31 European countries will be travelling to Valencia today for the three day long conference. The event has been organised by the Wilfried Martens Centre for European Studies, Konrad Adenauer Stiftung and hosted by Nuevas Generaciones (NNGG), the youth wing of Partido Popular.

Speaking ahead of the event, YEPP President, Lidia Pereira, stated that: “YEPP is very grateful to our Spanish friends and other organisers for facilitating this meeting. There are many issues facing the future of Europe and this weekend gives YEPP participants the chance to discuss their ideas and views on what their vision for developing a sustainable European trade environment should look like.”