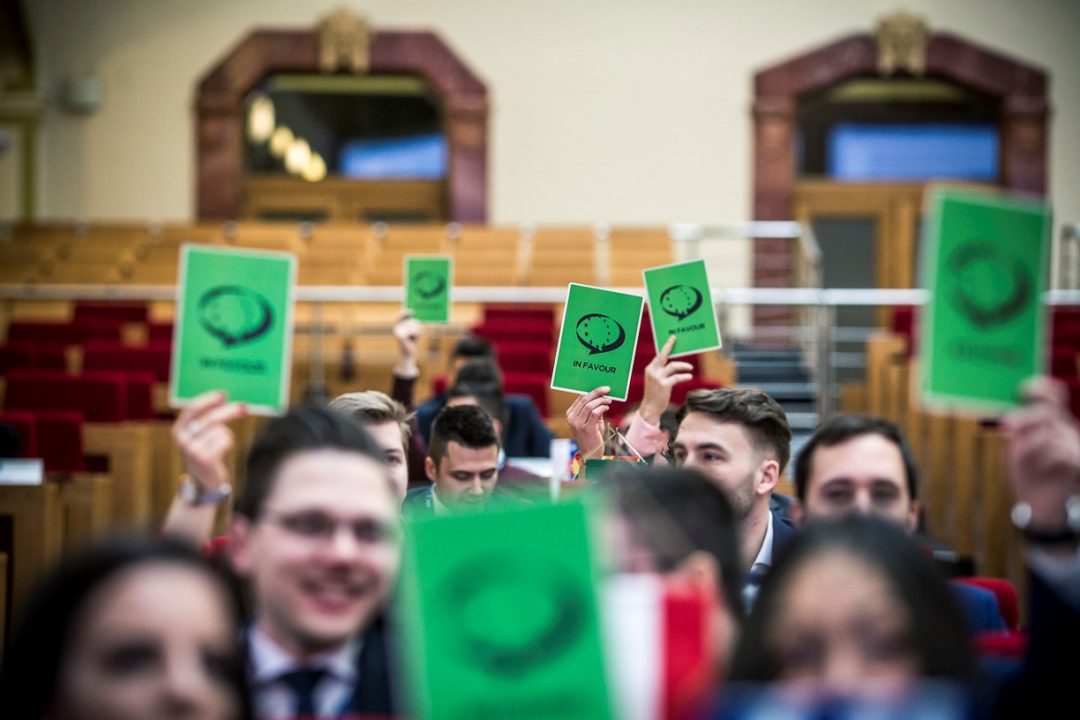 Prague, Czechia – This was the challenge that over 100 delegates from 34 European countries sought to answer during a conference on the Future of Democracy which was held from 21st to 23rd of February 2019 in Prague, Czechia. The event was organized together with the Wilfried Martens Centre for European Studies, Konrad Adenauer Stiftung, TOPAZ , Top Team and MKD.
The conference was an occasion to debate the issue of big tech companies and privacy issues, cybersecurity and digitalization of society as a whole with a number of distinguished speakers from NGO’s and private sector such as International Republican Institute, Semantic Vision and Microsoft.
Moreover, in a separate event organised by the Youth of the European People’s Party (YEPP) on Saturday, YEPP delegates discussed, voted on and adopted a Youth Manifesto for the European elections in May 2019. The Manifesto aims to offer a strong voice for all young Europeans and provide real alternatives to the solutions provided by populists.   In particular, the documents focuses on 4 different but related priorities. Firstly, YEPP calls for a further developments of digital Europe, particularly in the fields of education and job creation. Secondly, the Manifesto stresses that social cohesion is vital to create more opportunities for young Europeans and tackle negative demographic trends such as brain drain, unemployment and outflow of skilled working forces. Thirdly, YEPP advocates for fighting climate changes and the development of new sustainable solutions to decrease the use of fossil fuels and coal. Lastly, the Manifesto states that the principle of subsidiarity should be crucial to achieve a stronger Union and calls Member States to reinforce their cooperation on crucial issues such as the Common and Foreign Policy.
During the launch of the Manifesto, Dara Murphy, the EPP Campaign Director, stressed that despite the rise of populism in big countries such as Italy and France, the EPP is leading the election pools and will hopefully achieve the majority of the seats in the European Parliament. However, the EPP family must keep addressing the concerns of all European citizens and engage with them about the direction Europe should take for the next 5 years.
Speaking after the event, YEPP President Lídia Pereira said “It is undeniable that the digitalization is changing the way we live, work and how societies are organized. For example, democracy was never imagined as responsive and reactive to people’s demands as digital platforms allow them: tweet or like gives a sense of direct democracy. In an era of populism and fake news, digital literacy skills are crucial for people to distinguish facts from all the noise. We, as young Europeans, eager to anticipate the future of democracy but also committed to increase youth participation in politics learnt, discussed and debated about these topics during the past 3 days.”

“Having approved unanimously the Manifesto for the European Elections 2019 marks a great achievement for YEPP. It reveals not only commitment from all our member organizations, but unity in challenging times for European politics ahead of elections. The manifesto offers a realistic and achievable vision for the future of Europe and for all young Europeans,” adds Pereira.
#Youth4EU