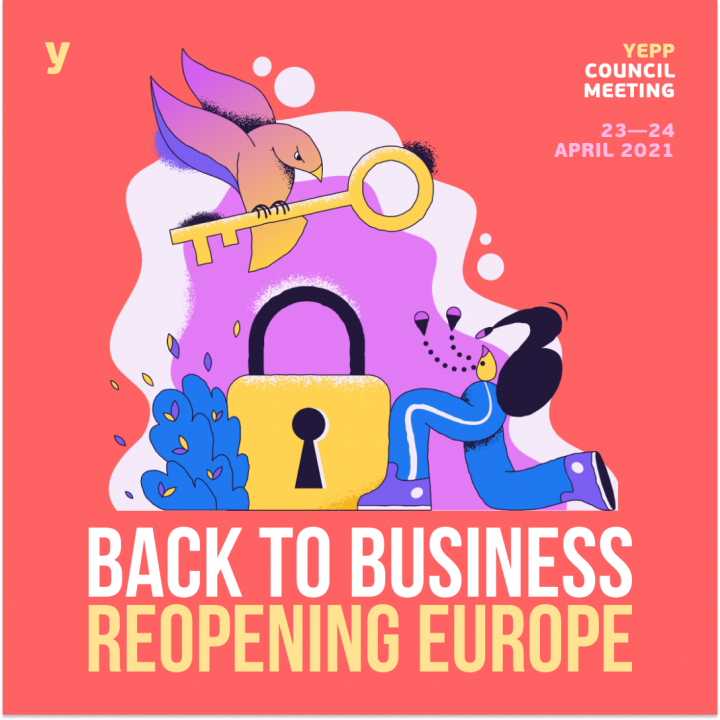 Brussels, Belgium – Over the last weekend 90 participants and distinguished guests, digitally came together to discuss the way forward and the reopening of sectors. The conference titled “Reopening Europe: Back to Business” focused on the European economy and the necessary steps needed to ensure successful revitalization, as well as Intergenerational Fairness.

On the 23rd of April, YEPP welcomed two Guest Speakers to its Panel discussion titled ‘Intergenerational Fairness’, where speakers Cat Tully (Managing Director, School of International Futures) and Ricardo Borges de Castro (Associate Director of European Policy Centre). Both speakers shone light on the importance of meeting the needs of the present without compromising the needs of future generations, with de Castro stating: “A future for all cannot be imagined by few.”

On the 24th of April, Finland’s former Prime Minister Alexander Stubb addressed participants at the event titled ‘Reopening the European Economy’, giving his perspective on the EU’s economic challenges ahead. Stubb stated that: “We need to remember that we are in a battle between state vs market, and that you can’t regulate yourself out of this, you need to innovate out of it”.

Members of the Youth of the European People’s Party (YEPP) also discussed and adopted numerous resolutions focusing on Water Management, 5G, EU-China relations, Transatlantic unity, tensions in Eastern Europe as well as the Humanitarian Crisis in Mozambique. In line with the Intergenerational theme, a resolution focusing on bridging the generational gap was unanimously adopted titled ‘Making tomorrow a priority of Today’. In addition, two statements were approved by YEPP members, which condemned the build-up Russian troops on the Ukrainian border and Russian attack in Czech Republic.

Check out the Resolutions here