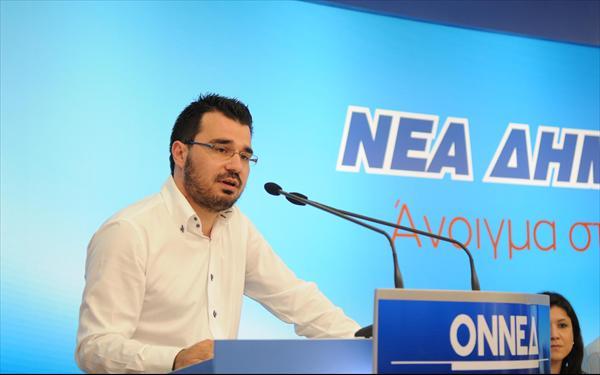 Today, while the economic crisis in Europe continues to affect the lives of millions of people, we all understand that the issue of Greece was merely the by-product of a larger problem. A paneuropean problem with Spanish, Irish, Italian, Cypriot and of course Greek dimensions. Although Greece was in the wrong path for many years, the real causes of the crisis weren’t confined to the Greek sovereign debt or excessive deficit.

Yes, none of us Greeks disagree. We have committed critical errors. We have been living beyond our means for years but, we can declare it clearly now, that the recipe given to us was wrong. Things have gotten worse as the tough austerity measures and the lack of growth policies have led the country into its 5th year of consecutive recession and with a unemployment level of up to 23%. Within this social environment of depression, my generation has to survive and change the landscape. We know that before asking anything from our European partners, we  must first collide with our own selves. We have to break stereotypes that bankrupt have led our society to bankruptcy and to change behaviors that have led us to disaster. Simply said, we have to move on and create a new Greece, more productive and more rational.

Nevertheless, the path we have chosen is not an easy one. There are many people who would love (for their own reasons) to humiliate our country and to transform Greeks into a nation of bowed heads. Moreover, as you may have noticed, some Media are trying to taunt Greeks or Greek symbols (from the Greek Antiquity) failing to understand one important fact. In the beginning it was Greece, then Portugal, Ireland, Spain and Italy but tomorrow it may be their own country. For many years, our country was in the hard core of the European Union, and given that there is no basis in the arguments made about Greece being a pariah state within the EU. Nobody has the right to tarnish the history of our country and our people. So if tomorrow, for instance, Greece overcomes its current economic distress, will it once again become the land of Ancient Greek Civilization and of culture?. Let us be more calm and not forget the fundamentals.

Greece needs to make steps forward and implement all the necessary reforms, but also it is the time for Europe to realize the flaws of the cure she gave us. European Union leaders must now shift their policies towards growth, or otherwise the economic and sovereign debt crisis will turn into a political earthquake. The new Greek government under the rule of Antonis Samaras is the best proof for the Europeans, that something is changing in our country. The willing for changes and clashes with the status quo is more clear than ever and we believe there will be soon gains for our country’s credibility. But when this situation will be all over, we, as the European Union, will have to assess our progress to integration and if we still have in our DNA the visions of Monnet and Schuman for a Europe of cohesion and solidarity.

All in all, I feel the need to emphasize that Europe has to be reassured that despite the ongoing crisis we are proud both as Greeks and as Europeans because we believe that although ancient Greece is the place where everything began, the European Union is our common future.