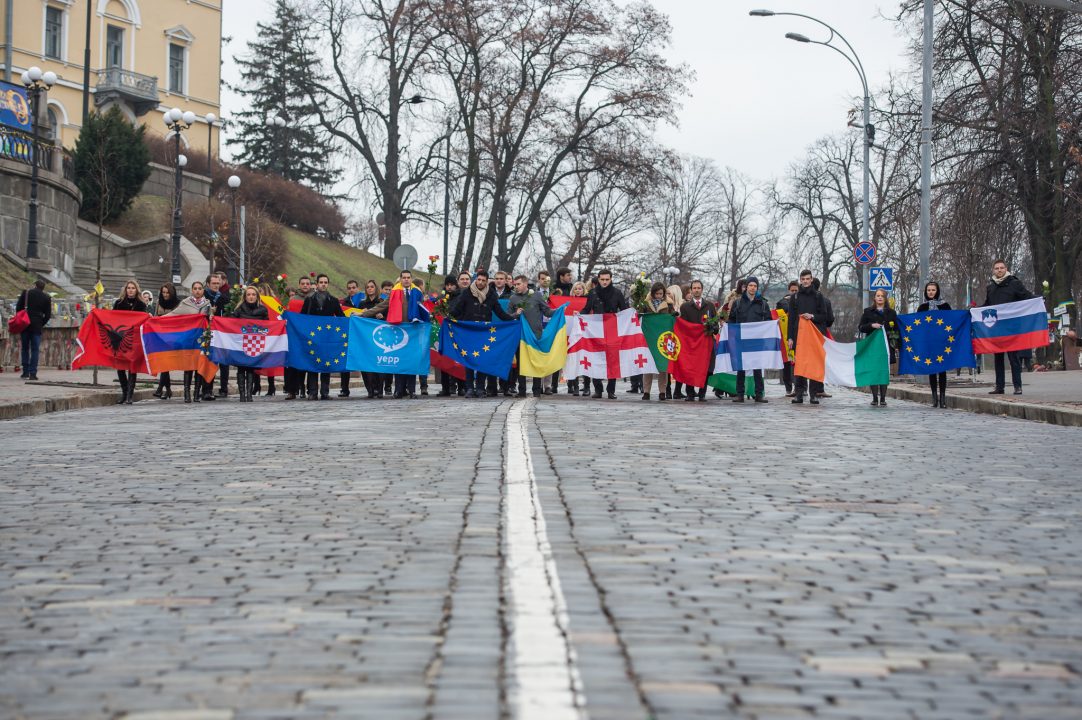 The Youth of the European People’s Party (YEPP) met in Kyiv, Ukraine on the 3rd to the 5th December for its Council Meeting. The meeting marks the 4th time YEPP has visited Ukraine in the past 2 years and commemorated the anniversary of the Revolution of Dignity that took place in Maidan square. The purpose of the young political leaders from across Europe was to put forward a white paper of reforms for the country that will empower its economy, strengthen the rule of law and solidify Ukraine’s position as a strong Western outpost in Eastern Europe.

More than 70 delegates from 30 countries took part in the three day programme, which began at Ukraine House under the hospice of Vyacheslav Kyrylenko, Vice Prime Minister, and a special screening of “Winter on Fire: Ukraine’s Fight for Freedom”.

In the Verkhovna Rada, the Council held a debate with Volodymyr Groysman, Speaker of the House and several young parliamentarians that show the new face of Ukrainian politics. Boris Tarasyuk of Batkivschyna outlined the governing alliance’s ambitious plan of reforms, as well as the areas where the leading centre-right is working on finding convergences for the greater good of the citizens. A panel discussion with representatives from the Ministries of Finance, Economy and Foreign Affairs shed more light into the hard road of reforms for the country.

After the series of debates with prominent Ukrainian and European officials and specialists, the Council of YEPP discussed and voted on a set of Economic, Judicial, Social and External Affairs reforms to be promoted within the country and to the European Institutions and Member States.

The highlight of the visit took place on Saturday 5th December when the young Europeans held a silent march in Maidan Square, holding flags from all the countries represented, in memory of the fallen heroes who lost their lives under the brutality of Viktor Yanukovych and his regime, including our two members Ustym Golodnyuk and Andii Movchan. Our solemn duty is to remember their sacrifice and never stop fighting for the democratic and free Ukraine that they envisioned.

The Council was made possible by the co-hosting of our Ukrainian members Batkivschyna Moloda, Youth of the Democratic Alliance and Young Rukh, in co-operation with the Youth of the Poroshenko Bloc and Young Udar and in partnership with the Wilfried Martens Centre for European Studies and Konrad Adenauer Stiftung.