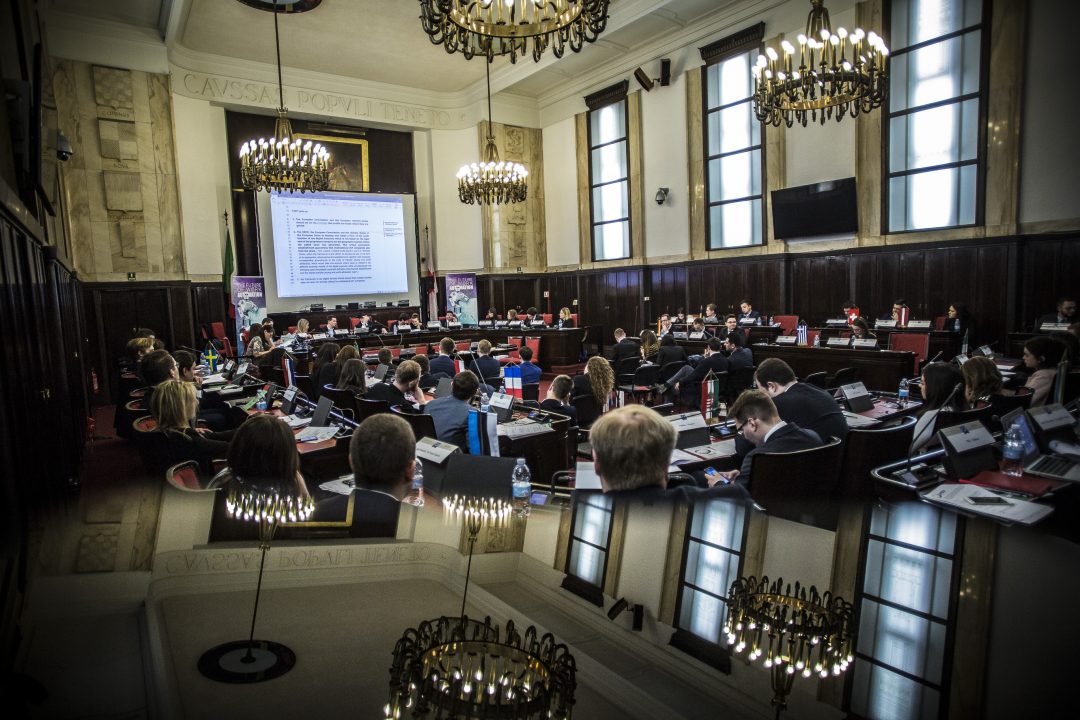 Milan, Italy – Technological advancement has the potential to empower millions of people through new opportunities. Our current social security systems don’t. What can Europe’s policy-makers do to support the future employment of youth in a rapidly changing, digitised landscape? This is the central question that the Youth of the European People’s Party (YEPP) worked to answer in Milan between the 15th and the 18th of February, in two separate conferences, attended by 130 delegates, including 28 centre-right party youth wing presidents from across Europe.

The Conference on the Future of Work in the Digital Era, a policy convention hosted by the Wilfried Martens Centre for European Studies and the Konrad Adenauer Stiftung at the headquarters of Microsoft Italia and Milan’s Acquario Civico, saw expert panellists elaborate on topics such as youth entrepreneurship, vocational training, automation and women in tech. “We have to change the culture of technology,” said Paola Cavallero, Microsoft Italia’s Marketing and Operations Director, to encourage more women to participate in tech. Speaker Professor Andrea Gallo concluded that “work-based learning is the key to finding a job.”

The Conference of Presidents, hosted by YEPP and Forza Italia Giovani, opened on Friday evening with a visit to the Mediaset headquarters, where participants explored the effects of digitalisation on the media sector. After touring the TGCOM newsroom, they were treated to a speech from Fedele Confalonieri, president of Mediaset. During his speech, Mr Confalonieri spoke about media regulation and its responsibility to the public in a rapidly changing media landscape. With news being consumed across various social platforms, the onus for traditional fact-checking and accountability has decreased.

On Saturday, following a Presidents’ Breakfast where policy-making and strategic goals were discussed among the presidents present, YEPP held its conference proper, in which it produced two white papers: one on the Future of Europe, the second on the Future of Work. The two papers call on policy-makers to support more dual study vocational programs, increase digital competencies and work to harness Europe’s competitive advantages in order to lead the digital age.

“The white papers we adopted today represent a step in the right direction of supporting youth in their search for gainful employment, ensuring a competitive digital Europe and fostering entrepreneurship and innovation,” said YEPP President Andrianos Giannou. “We must make Europe work for everyone. We can achieve that by embracing, harnessing and leading innovation, while making sure all Europeans benefit out of growth. The opportunities that will come from an innovative, creative Europe will far outweigh the negative effects of digitalization.”

The conference closed with the addition of the Denmark’s Konservativ Ungdom to the YEPP family.

About YEPP
YEPP is the official youth organisation of the European People’s Party. We connect 62 Centre-Right youth political organisations from 40 countries all over Europe, representing more than one million members. Founded in 1997, YEPP has developed into the largest political youth organisation in Europe. It counts three current and former heads of state among its executive board alumni. Apart from being active within the structures of our mother party the EPP, we are committed in a number of other international arenas. One of our main objectives is to provide ground for training, discussion and cooperation and prepare the younger generation to lead tomorrow’s Europe. This runs parallel to our mission to find solutions for a better, inclusive and secure Europe and to uphold our principles, policies and ideas in the European political debate.