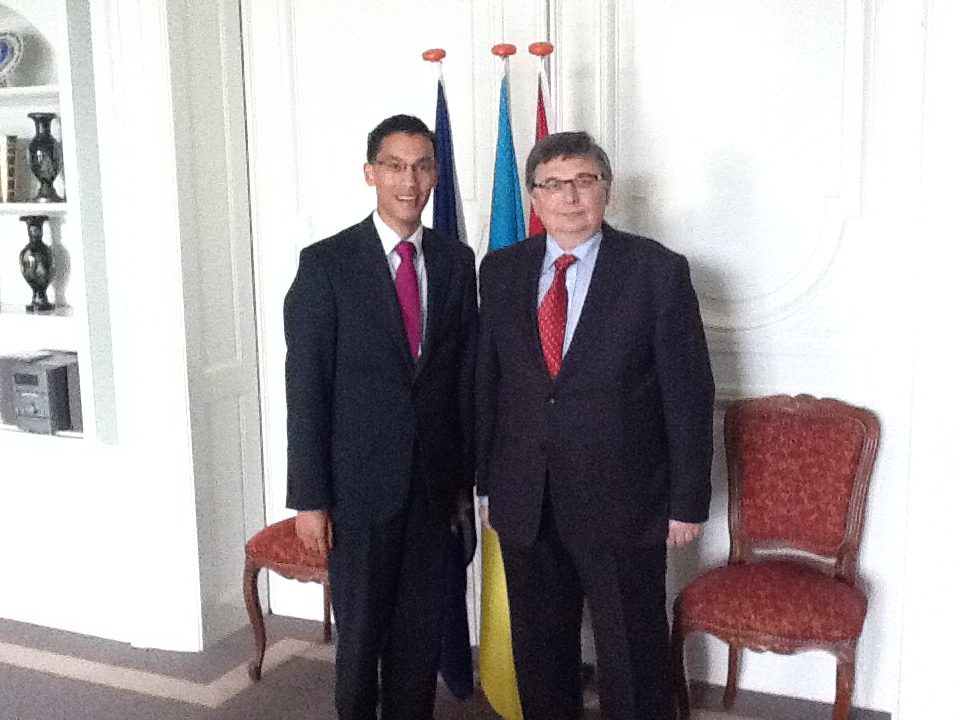 This article is my first blog for the website of the Youth of the European People’s Party (YEPP). As elected board member I want to work on three political issues in the upcoming period: freedom of religion, fighting democratic deficit of the EU and further democratisation in Eastern Europe. With the Eastern Partnership Summit in Vilnius (Lithuania) ahead it is whorth to work on this subject and focus on the involved countries, in this article Ukraine.

Ukraine gained independence after the collapse of the Soviet Union in 1991 and has since veered between seeking closer integration with Western Europe and reconciliation with Russia, which supplies most of the country’s energy.[1]

Second President of the country Leonid Kuchma was focused to the Russian Federation during his time in office. During the years, opposition to Kuchma grew and led to the ‘Orange Revolution’ in 2004[2] and brought the pro-Western Viktor Yuschenko and Yulia Tymoshenko in charge.

In 2010 it was Viktor Yanukovich (Party of the Regions) who won the presidential elections. Opposition leader Yulia Tymoshenko is detained since 2011 after a trial which was unlawfulness and arbitrary. This is confirmed by the European Court of Human Rights (ECHR) in Strasbourg earlier this year. The ECHR ruled unanimously that her pre-trial detention was not to make sure that she would face justice but was imposed for ‘other reasons’[3], meaning motivated by political considerations.

As International Secretary, and now as YEPP Board member as well, I work actively on the developments in Ukraine. A few weeks ago, I visited a presentation about the priorities of the Lithuanian EU-Presidency in Brussels. An advisor to the President of the European Parliament stated that the signing of the Association Agreement depends on the release of Yulia Tymoshenko. However I absolutely agree that Ukraine should solve the situation regarding Yulia Tymoshenko, and I my raise voice when Tymoshenko’s rights are violated and even more when rights are strongly violated. But, there are many other challenges in the field of human rights, freedoms of citizens, good governance, the fight against corruption and reforms in various fields as well. Only then will the country be able to be a serious partner for the EU.

I have addressed my opinion and views about the current developments in the country in several meetings with high senior officials, including a meeting with the Ukrainian Ambassador in The Netherlands. In this meeting I have expressed my deep concerns about the space for political opposition, the lack of the rule of law, situation around Yulia Tymoshenko and strongly condemned the arrests of members of our member organisation Democratic Alliance in May and June 2013. Freedom of speech and demonstration are basic rights in a democracy. I think that not only laws should be improved in general, but also the way how authorities maintain the law.

When Ukraine wants to sign the Association Agreement with the EU -which the Ukrainian Ambassador confirmed- the country choose also for the democratic values where the EU stands for. This means that there should be fair and free elections organized in the country and the freedom of speech, meeting and demonstration should be respected by the Ukrainian authorities.

During the meeting which the Ukrainian Ambassador I took the opportunity to underline -once more- my strong support for initiatives coming from the civil society in Ukraine (NGO’s, political parties, trade unions etc.) which contribute to improvements in the country.

With signing the Association Agreement, the EU shows that it cares about Ukraine and its people, especially the youngsters who feel them European (> 48%). It makes clear that the country belongs to Europe and to its culture. But the question if the Association Agreement with Ukraine will be signed is on the table in Vilnius during the Eastern Partnership Summit in November 2013. The EU-officials should judge about the efforts Ukraine made; on content.

Working on Ukraine made me realizing again that my positions as YEPP-representative/International Secretary are engaging in very different circumstances than our collegues from the Ukrainian sister parties do. As board- and council member (coming from ‘the West’) I see it as duty to assist them where I can. And I do an appeal to the rest to do the same. In that way we build on an EU based on values too.

I dedicate this first article to our fellow collegues of Batkivshchyna Moloda, Democratic Alliance and Young Rukh. Dear friends: keep going the good work, for now and in the future.

Frank Visser is Treasurer of YEPP since May 2013. He is also International Secretary of CDJA, full member of YEPP, and member of the EPP-working group on Membership issues. Frank Visser comes from The Netherlands.