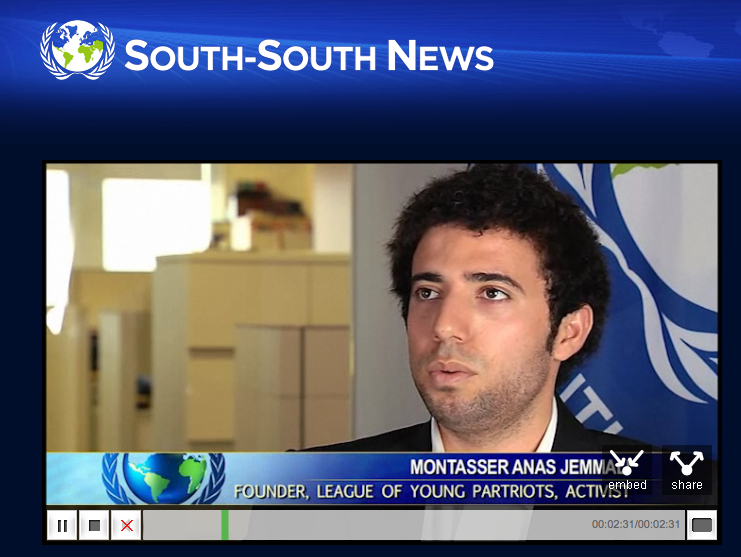 I met Montassar 4 months ago in Marseille in the EPP Congress. He was not talking too much even though he had countless thoughts crossing his mind. Montassar was one of the front-runners of the revoution in Tunisia. He also managed to create the “League of Young Patriots”. Most of us have no clue about what this organization stands for, but i can tell you one thing for sure. If Tunisia is full of people like Montassar, democracy is not too far away.

He sent me an email some weeks after the Congress, bringing up his ideas about democracy and proposing cooperation with european organizations and institutions. Between those lines though, i saw someone very serious about his vision. Beyond the nice words, i saw someone having nothing but determination for the democratic future of Tunisia. We spoke again and again about his visits all across the world, about getting his message across everywhere he could. He sent me an interview of his last week, that is definitely worth watching. He sent me videos from his speech in Tufts University. He is going to Beirut next week to speak again about his story and build synergies for his movement. He is restless.

But what Europe can do for Montassar? I mean, besides inviting young leaders to speak, listen, discuss and smile for the group photos, what Europe can do for these countries to give them a chance in a functioning democracy? The European Union has spent the last decades spreading its values to Eastern Europe and struggling democracies. Now is the time to put in place all these practices that transformed Europe into the most prosperous region in the world, even in times of crisis. All the governments, parliaments and all other kinds of bodies have built over the years, a really open model of democracy. A structured model that our southern friends should place inside their culture.

Europe should not politically come closer to the “Arab Spring” countries despite of our cultural differences. Europe should bring these nations closer because of our cultural differences. Democracy is a two-way process, and so is the process of spreading it. The benefits are mutual for northern Africa and Europe. Montassar, seems to understand this very well. I guess this is why he is going that extra mile building that bridge with his european friends. Now it’s our turn to meet him halfway.

If Tunisia is full of people like Montassar, democracy is not too far away.