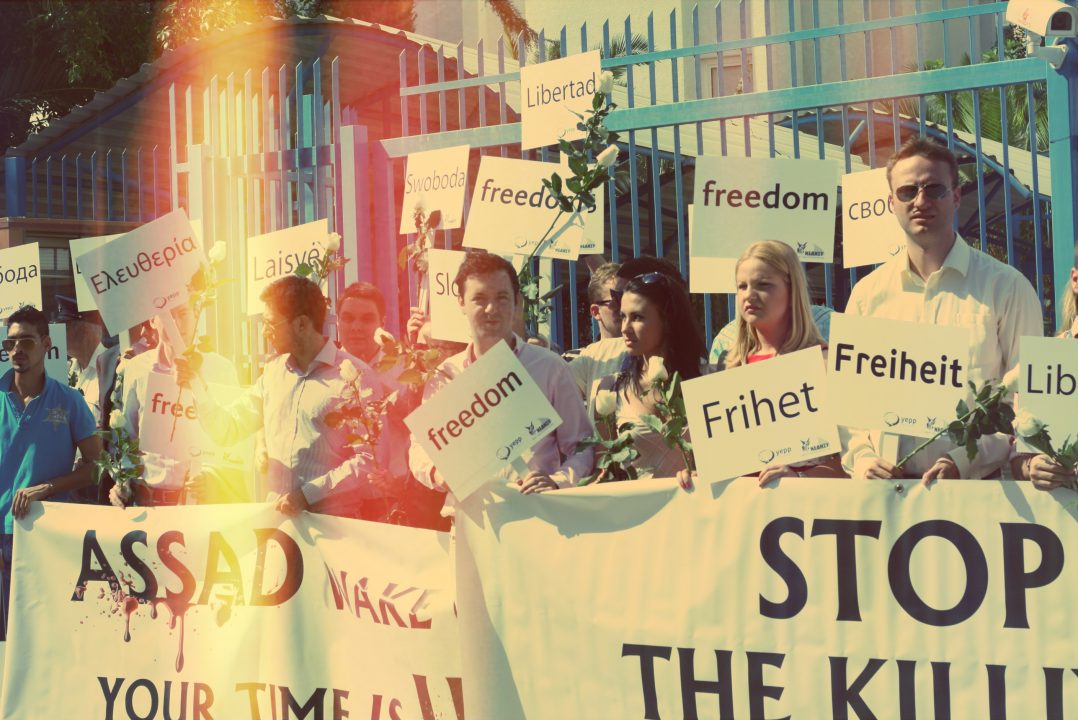 As the conflict in Syria seems to further escalate and a military intervention is more probable than just some weeks ago, it is worthwhile to look back on YEPP’s recent manifestation in the same issue.

During the summer school, held in Cyprus two weeks ago, YEPP delegates from 28 countries gathered in front of the Syrian Embassy to reject the violence that caused the death of more than 10.000 citizens so far.

While YEPP members held banners displaying the word ’freedom’ in many languages, I was given the opportunity to make a short speech about the Syrian situation. I emphasized that the EU and its member states have obligations in four major policy areas.

First of all, the EP should commit itself to provide humanitarian aid to suffering citizens, especially as the violent acts affect mainly civilians. Secondly, member states should lay the legal grounds for a profound international investigation of mass massacres and crimes against humanity. Thirdly, the EU foreign service should strengthen contacts with opposition groups. The focus must be on those political forces that are interested in a peaceful solution, embrace democratic rights, while respecting the diversity of Syrian society with special regard to ethnic and religious minorities. Last, but not least, with no prospect of cease-fire, the EU should impose comprehensive sanctions under the VII. charter of the United Nations. These possible sanctions should be introduced in a way that they do not harm innocent civilians. As a cradle of all these, we shouted it out loud, that the Assad regime has no place in the future of Syria.

The protest of YEPP at the Syrian Embassy might not result in the collapse of the oppressing regime. However, it was a good opportunity to join international forces that call for the immediate stop of brutality in Syria. YEPP will definitely continue to raise awareness of what is happening just some hundreds of kilometers from our borders.