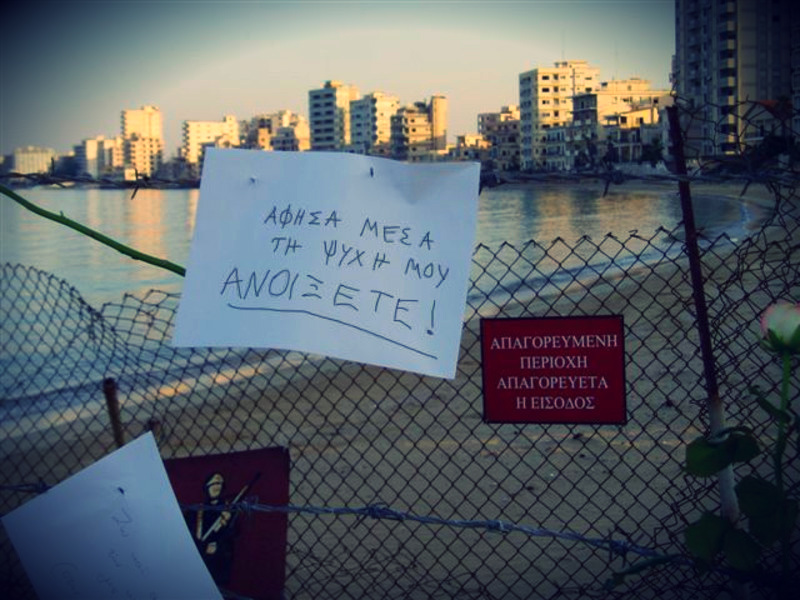 In the early hours of this morning, for the 39th year in a row, Cyprus was awoken by the familiar but awful sound of war sirens.  They go on every year on the same day and time, on the sad anniversary of the Turkish invasion on the island.

The 14th of August 1974 was one more day that marked the turbulent timeline of our small but historic island-nation.  Following the first phase of the Turkish invasion on the 20th July of that year, 40000 Turkish troops raided the northern part of the island.  Not able to be stopped by the 12000 strong Greek and Cypriot army, they occupied 36% of Cypriot territory.  Thousands were killed or are still missing today, in despair of their loved ones.  The invasion, and ongoing occupation, dislocated hundreds of thousands of people from their homes making them refugees within their own country.  Among them, my twenty-year old parents who fled their homes taking nothing in search of a shelter from the bombs, and had to start their adult lives in refugee camps.  Today, 39 years later, they have yet to be allowed to return to that little place they called home.

A tragic, constant reminder of Turkey’s violation to our basic right of self-determination is the huge Turkish flag that provocatively decorates the mountainside of “Pentadaktylos”, a mountain range in the north.

I grew up proud of my Greek-Cypriot identity, hearing the stories of our glorious, ancient past.  Mycenean Greeks settled Cyprus in the 2nd millennium BC.  Throughout the thousands years of our history, numerous empires like the Franc, the Ottoman and the British have ruled the island.  Whilst under foreign rule, the population of the island kept its identity, its religion, its language and its customs, despite all efforts to assimilate the Greek-Cypriots into their rulers’ culture.  People often ask why Greek-Cypriots wave Greek flags at every national opportunity.  Speaking for myself, I wave it not to celebrate Greece as a country, but Greeks as a nation.  The Greek flag is the flag my parents grew up with (prior to the Cypriot independence of 1960 which gave birth to the Cypriot flag) their parents before them, and so on.  It manages to beautifully incorporate everything that defines my nationality, making it a symbol I very proudly identify with.

These days, nationalism is used to attack patriotism.  National symbols have taken the place for racism and extremism.  I refuse to accept that.  In order to honor my country’s and my nation’s history, I have to respect the history of other nations as well.  I cannot demand respect for my own national identity, if at the same time I do not respect the identity of others.

Cyprus has a significant minority of Turkish-Cypriots (18%).  If we are to move forward, both sides need to respect our differences and accept our similarities.  To do so, every Cypriot must be allowed to return to their rightful residence.  Ask any refugee and they will tell you that they feel like guests in their new neighborhoods, as their refugee house doesn’t feel like the home that was taken away from them.  The Turkish side needs to co-operate in opening the mass graves and their secret files to allow for the missing persons to be identified.  This will help bring closure to their loved ones, who have been hopelessly clinging on the aspiration of seeing their brother, father or child again, after nearly four decades.  The 80000-strong occupying army has no place on a quiet island of 800000 people; and definitely no purpose, considering that the Cypriot army amounts to 5000 full-time personnel.

Nearly four decades after the invasion that divided our island, it is time to reunite and peacefully coexist, under a fair and viable solution.  As difficult as it may be, we are ready to proceed to a painful, but historical compromise, putting reason over emotion.  Turkey has to respect that and reciprocate by complying with International law; allowing us to return to the homes of our parents and bring down the barbed wire that divides Nicosia, the last divided capital in Europe.

*The picture depicts the “ghost” city of Famagusta, the home town of my parents, with a note attached that directly translates: “I left my soul inside.  Open up