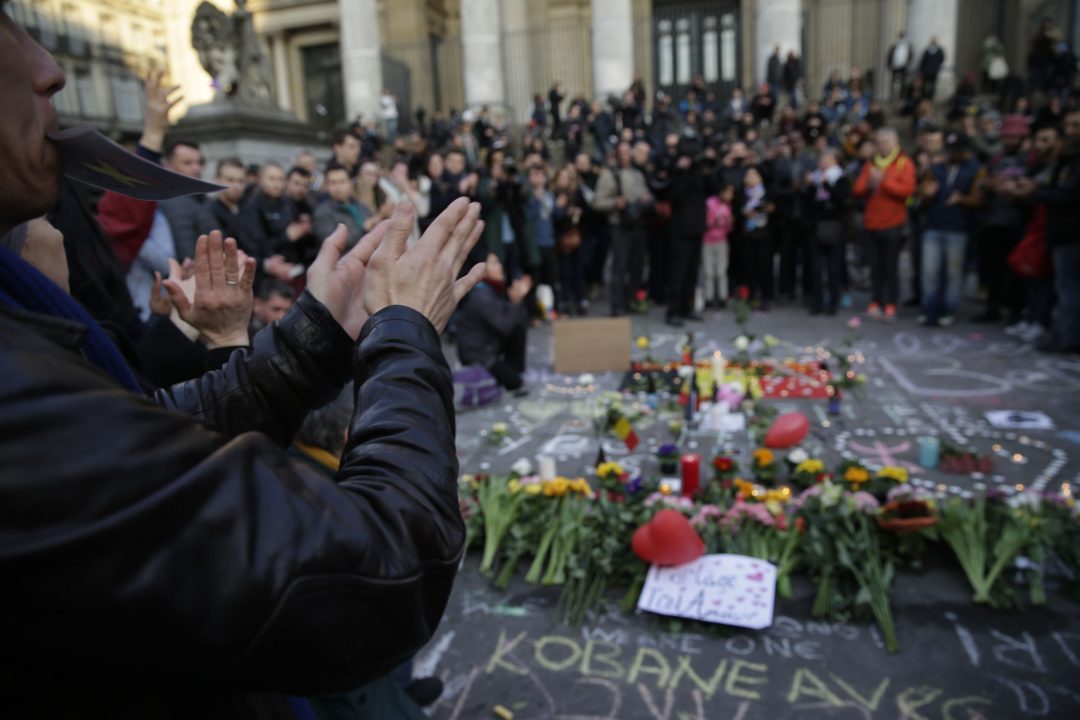 People applaud in tribute to victims at a makeshift memorial in front of the stock exchange at the Place de la Bourse (Beursplein) in Brussels on March 22, 2016, following triple bomb attacks in the Belgian capital that killed about 35 people and left more than 200 people wounded. A series of explosions claimed by the Islamic State group ripped through Brussels airport and a metro train on March 22, killing around 35 people in the latest attacks to bring bloody carnage to the heart of Europe. AFP PHOTO / KENZO TRIBOUILLARD

The latest wave of terrorism, this time in the seat of the European Institutions, should be the final warning for our society and for our governments to respond to the threat of IS collectively and with determination.

So far, the citizens have answered proudly and defiantly. Throughout Brussels, people are coming together peacefully, leaving their own messages as an answer to terror, singing and mourning the loss of life with respect. This is what sets us apart from the terrorists, our humane response to tragedy and loss.

Our administrations should follow with responsibility, tackling IS decisively while staying away from populist manoeuvres and divisive rhetoric. Terrorists are actually helped in their strategy to radicalise young muslims in Europe by politicians like Donald Trump, who vow to exclude the whole Muslim community from the United States, or when countries proclaim that they will only accept Christian migrants. This helps turn young, desperate adolescents into suicide bombers.

An often forgotten characteristic of the terrorist attacks that shook Europe in the past 12 months is that this time they have also come from European nationals. We can choose to close our borders, whether internal or external, but it will not prevent the radicals who hold a European passport of putting these attacks forward.

Europe and the democratic world need to fight back decisively, both at the home of IS but also at our home.

As Europeans, we should defend the lives of our citizens, the European values of tolerance and the rule of law that form the backbone of our societies. At the moment, there is a gray area where these collide, and our expectation of politicians is to stand up to the challenge and put forward security policies that minimise the damage to our values, but maximise the protection of our lives. Information sharing within the European Union’s security services should be enhanced, while more operations should be jointly coordinated. This approach is not a result of “more Brussels”, but a need that arises from how terrorist organisations work, with terrorists hitting one country, while preparing in another and hiding somewhere else.

At our home, we need to work with minorities who feel alienated in our societies. These are not only racial minorities. Most often youngsters who are unemployed or suffer from domestic problems are the prime candidates for IS recruiters to radicalise, and so we need to increase the resilience of those families and young people to radicalisation. There is nothing revolutionary or philosophical about this. In Vilvoorde, a Brussels suburb once as notorious as Molenbeek, local health workers, religious leaders, social workers and members of parent networks care for the troubled youth by offering therapy, housing support and help in finding a job. The society works by responding to this; after the Charlie Hebdo attacks the local community was alarmed by students who called the killers heroes, notifying authorities who were able to respond more effectively.

Looking at the IS stronghold in Syria and Iraq, it’s worth noting that they are losing significant territory in the self-proclaimed state from Kurdish troops, Shia militias, the Iraqi army and US-led airstrikes. That is the reason they are putting all their might in terrorist attacks; in order to maintain the rhetoric of victory and military strength by capturing the world’s attention outside of home.

On IS ground in Iraq and Syria, the Western alliance should demonstrate more might with the deployment of troops to accompany the airstrikes. Military force is not enough on its own, however it will help to capitulate IS where it is stronger. Real peace will only come in place if these troubled regions enjoy peace themselves. The Middle East peace process is failing and more effort should be put into providing the Sunnis, the Shias, the Alawites and the Kurds with confidence that they can live in peace, and with a share of the power in democratic states.

Closing, I feel the need to point out that the millions of migrants flooding the Western world are people who are running away from the same radicals who are attacking Europe. They are, like us, trying to protect the lives of themselves and their families. For them, the need to return to the land they call home is bigger than any other, and this is what they will do once their home territories are stabilised and peaceful. For the moment, whether we choose to respond to them with solidarity or with fear, is up to us.