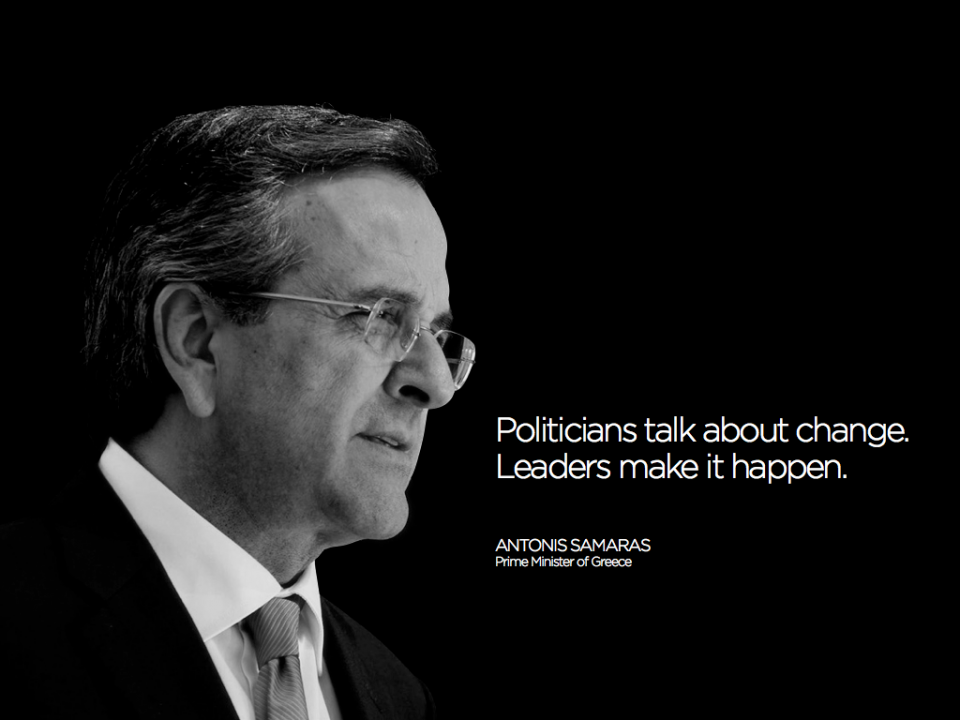 Last week was a good week for Greece. Here is what happened:
– Credit rating agencies upgraded the economy by 6 degrees, after a record of consecutive downgrades for 2 years now.
– The European Central Bank is buying again state bonds from Greece.
– A Greek billionaire, blamed for tax fraud of 701 million euros is arrested and actually in jail. So is the former minister of defence for abuse of public money.
– A new bill for a much faster jurisdiction system was introduced in plenary.
– A “villa” occupied for 20 years by anarchists, used as an asylum for rioters and their illegal material, was finally recuperated by the police.
In other words, the state seems to work as it should. It is not anything to cheer about, but the first steps of recovery are always the most powerful ones. And the hardest to take. Getting Greece out of the ciris is probably one of the most challenging tasks that a politician ever took worldwide. Antonis Samaras won the election amid criticism, disbelief, distrust, cynicism for the future of his government and the country. Everyone started talking about a temporary solution, with one more Prime Minister that promises a lot and won’t be able to deliver.
Going some months before that, Samaras, as opposition leader, was questioned by his own European political family, at the EPP Summit, for suggesting the things that are happening now in Europe. He was called “the populist” back then. Going even further, when he got the leadership of the party, Nea Demokratia’s MPs, other politicians, party members and voters, all questioned him so much that the party shrank and became weaker.
Samaras was named last week “politician of the year” from a nationwide German newspaper. I will not comment on the meaning, the motives or the impact of such a decision from a German medium. What I want to say though, is what I felt this week after all what happened. I felt more secure, more stable, more hopeful, more satisfied, more happy as a Greek citizen. And I feel, that with this leader, the country is witnessing change for the first time in decades. Things are changing in Greece. People’s sacrifices are paying off. Recovery is slowly making its presence obvious. And it is all happening under the leadership of a politician, questioned from day one of his presidency.
I don’t know if kids are asking Santa to bring change in Greece as a gift for this year. But I am sure citizens, angry or hopeful, optimist or cynical, right or left, are asking Samaras for a real change in Greece. Change, that many politicians always use in their rhetorics. Change, that only comes when real leaders are there to make it happen.