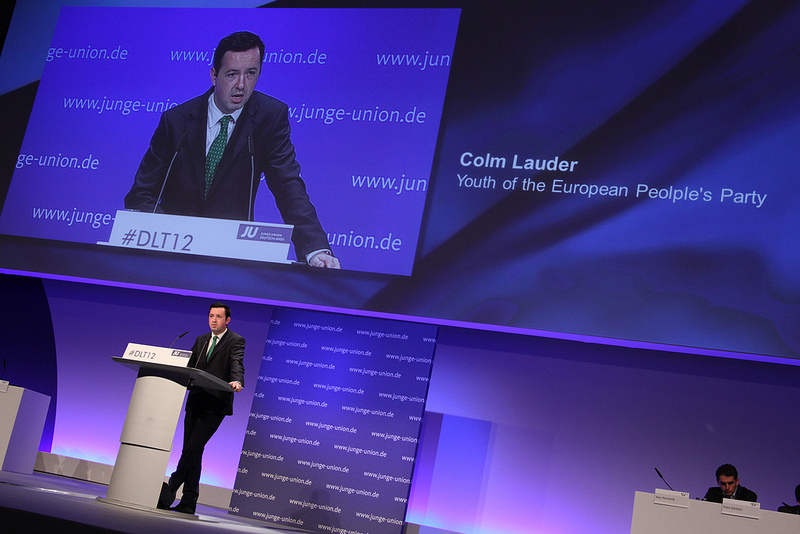 It is a great pleasure to address you here at Deutschlandtag in Rostock. I am delighted to get the opportunity to address you not only on behalf of the Irish government party, Young Fine Gael, but on behalf of Europe’s largest and most influential political youth organisation, YEPP. An organisation that proudly had Junge Union as founding members in 1997.

As you will know, YEPP celebrated our 15th Anniversary in 2012, 15 years with Junge Union at our core. 15 years of working together. This process is ongoing and we are delighted to be here in Deutschlandtag with fellow YEPP Board members Sara from Sweden and Junge Union’s very own Benedict Poettering – whom I warmly congratulate on his election as Vice President of Junge Union on behalf of YEPP.

Our role, as young European politicians and innovators has never been so important or influential. The ideas and policies of old have in many cases failed the youth of Europe. Our leaders in Brussels, Dublin or Berlin have given us, the youth, a listening ear to put forward our ideas and our policies. That is an opportunity that I know Junge Union has seized upon, and YEPP has been no different.

In the last year, we have authored, lobbied for, and proposed high-level policy from issues as broad, yet as specific, as European banking regulation to tackling youth unemployment. We have continued to campaign for democracy in Belarus. Our hearts go out to the Belarusian people in their valiant struggle for democracy and against tyranny.

In two weeks time we will lead a sizeable YEPP delegation at the EPP Congress in Bucharest. As this we will present our solutions for tackling youth unemployment in Europe today. A youth solution from a youth perspective.

YEPP, unlike our equivalents on the left, tackle issues that effect us head on. We provide the solutions, we provide the ideas and we will see a better Europe through our involvement. What are the socialists providing? NOTHING. YEPP, and the EPP, continues to lead from the front and to provide real ideas not empty rhetoric.

Also at the upcoming EPP Congress in Bucharest, we have the great pleasure of co-nominating a former YEPP Board Member for the EPP Vice-Presidency. Irish Minister for European Affairs, Lucinda Creighton served on the board of YEPP as recently as 2004. She will be the first ever YEPP nominated candidate for the EPP Board, and we know we can rely on your support to ensure a strong voice for the youth of Europe on the EPP Presidency.

I look forward to working with Junge Union, alongside the youth of Europe in providing real solutions to a very real crisis. I know Junge Union will continue to be among our strongest contributors. Your members are an asset to Europe.

On behalf of the entire board of YEPP, I wish you every success for your Congress and wish congratulate the new Junge Union Board.

Thank you and hope to meet many of you this evening.